Incineroar (ガオガエン, Gaogaen) is a fire/dark-type Pokémon introduced in Generation VII who is the final evolved form of Litten.

Incineroar is a muscular, bipedal feline Pokémon resembling an anthropomorphic tiger. It is colored mostly red and black, with banded stripes covering its arms, legs, and tail. It has green eyes, five-fingered hands with sharp claws, and a gray-colored torso resembling a sleeveless muscle shirt with black markings. Around its waist is a flaming red, orange, and yellow belt, out of which Incineroar produces its fire attacks.

Incineroar is a violent, aggressive Pokémon known for its brutal prowess in battle. It is known to be indifferent and arrogant, even refusing to battle weak or injured foes, though it is said Incineroar deep down loves praise and attention and plays its antagonistic "heel" impression for show.

When battling, Incineroar can get too immersed in participating in the combat, and in worst cases one can drag their innocent Trainer into the fight. This makes Incineroar being spurned by the majority who keep their distance with them.

When they start to get attached to small Pokémon and children, nonetheless, Incineroar actually feel immense joy even though they usually put up a cool facade towards the former. In fact, they will have their fighting spirit attenuated when they have to battle against a more feeble foe, which can unfortunately let down their guard and being taken advantage of.

Incineroar's belt (which is its navel) can create very dangerous flames when its fighting spirit is stoked.

Incineroar evolves from Torracat at level 34. It is also the final evolution of Litten.

Known Trainers With an Incineroar

Incineroar first appeared in the Super Smash Bros. series in Super Smash Bros. Ultimate as a playable character. It has also been revealed that Unshō Ishizuka had been recording his lines as Incineroar in Japanese, prior to his passing in August 2018.

Incineroar is based on a tiger and a wrestler, specifically that of a heel, or a villain role wrestler, possibly being the inspiration for its Dark. Its appearance also draws similarities to the popular manga character Tiger Mask, who was also a heel wrestler. Incineroar may also be based on Zangief, a Russian wrestler from the Street Fighter series nicknamed the "Red Cyclone" who, like Incineroar, has a lariat as one of his signature moves. It also has some characteristics of domestic cats.

Its shiny form is based on Lucha Libre heels, or rudos, who are often themed in demonic and skeletal motifs, as well as a white tiger, hence to its Chinese Zodiac motifs for being a Fire type Starter Pokémon.

Incineroar comes from incinerate (to burn) and roar (the sound a tiger makes). 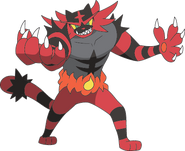 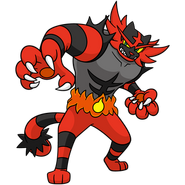 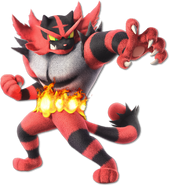 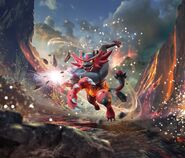 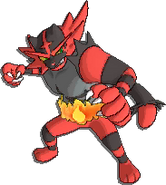 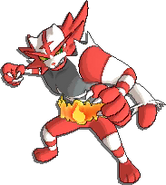 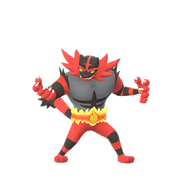