Impidimp is a small, pink, bipedal Pokémon. His large head has two pointed ears and a black, bat-like wing on the back of his head. He has large eyes with small pupils and black markings on his face. He has a long, pointed nose with a single nostril. His mouth has a black tongue and two fangs sticking out. His hands have three digits and its feet are digitless. He has no tail.

Impidimp not only sneaks into households to thieve, but also feeds off of negative energy and sucks them through his nose.

Impidimp is based on an imp, possibly the Lincoln Imp in particular. It may also take inspiration from other types of fairy-like creatures in folklore such as goblins or gremlins. Its small wings on the back of its head could be a reference to imps being known as small devils.

Impidimp is derived from imp, impediment, and impudent. It may also come from dimpsey, a term used to refer to the time of day near dusk, hence its Dark-typing. 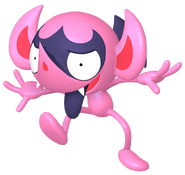 Add a photo to this gallery
← Hatterene | Impidimp | Morgrem →
Retrieved from "https://pokemon.fandom.com/wiki/Impidimp?oldid=1208859"
Community content is available under CC-BY-SA unless otherwise noted.