Outside of the Pokémon franchise, she did the Japanese dub voice of Fievel in the An American Tail movies, Dot Warner in Animaniacs, and Applebloom in My Little Pony: Friendship is Magic and was also the voice of Sailor Tin Nyanko in the fifth series of the Sailor Moon anime. In addition, Ōtani is also known for her role of the talking reindeer (or rather unceremoniously, 'raccoon-dog') Tony Tony Chopper in the manga/anime franchise, One Piece. She also provided the voice of Konohamaru Sarutobi in the Naruto series, Hana-chan in Ojamajo Doremi, and Candy in Smile Pretty Cure. 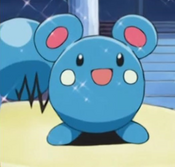