The Legend of Thunder

Hun is a member of Team Rocket. He appeared along with Attila in "The Legend of Thunder".

Hun and Attila are both quite calm in everything they do, from operating on missions to even retreating. Hun is the dominant partner and seems to only act when necessary.

Hun and Attila both seem somewhat set in their rank, and approach missions casually. They seem to keep their cool even when they lose; in these situations, they calmly retreat. Despite physical stereotypes, Hun is the dominant partner, telling Attila to do things that he could actually do himself. Attila doesn't object or show any signs of aggravation over this role, however. 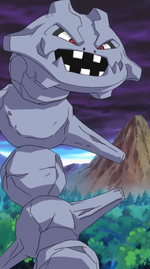