Prior to Movie Panic

Less than 5 chapters as Trapinch

When Hugh was a child, he had his sister send Purrloin, while he sent Trapinch to battle. However, Team Plasma grunts arrived and snatched Purrloin away.[1]

Eventually, it was shown to have evolved into a Vibrava, when Hugh used it to chase some girls off using Sonic Boom.[3]

When Hugh and Rood were ambused by the black Team Plasma, Hugh used Vibrava and Eelektross to fight them.[6] Hugh's Vibrava fought against Team Plasma grunts. It also carried Hugh across the school to meet up with Rood, who had found the chip.[7] Hugh used his Vibrava to battle Team Plasma grunts at the Plasma Frigate. He fought the ones that had kidnapped his sister's Purrloin five years ago. Vibrava attacked the duo's Zweilous, defeating both of them.[8] As the Plasma Frigate was heavily damaged by Kyurem's attack, Hugh went off the flying ship by flying around by Vibrava.[9] 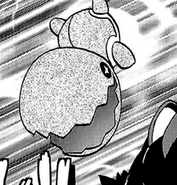 As Trapinch
Add a photo to this gallery

Retrieved from "https://pokemon.fandom.com/wiki/Hugh%27s_Vibrava?oldid=1287535"
Community content is available under CC-BY-SA unless otherwise noted.