Hoopa (フーパ, Fuupa) is a Psychic/Ghost-type Mythical Pokémon introduced in Generation VI. If the Prison Bottle is used on Hoopa Confined, it will transform to Hoopa Unbound, becoming a Psychic/Dark-type Pokémon.

Hoopa Confined is a small Pokémon, who wears yellow rings around its horns and belly. Its eyes are green and its body is painted pink and violet. When transformed into Hoopa Unbound, it is a large, purplish-gray genie-like being. It has triangular red eyes, a long tail with a spike at the end, six arms and a ring in its chest. It has big spiky hair and big horns with rings held tightly around them.

The mythical Hoopa is said to be a troublemaking trickster that can open portals to other dimensions with its hoop. It is thought to use this ability to cause interdimensional mischief, though some believe that it also uses it to hoard objects that catch its interest in some unknown realm. Long ago, an ancient desert civilization was said to have sealed Hoopa's true power away in an artifact known as the Prison Bottle. Opening the bottle would restore its strength for a short time; in this form, known as Unbound Hoopa, it becomes a monstrous, six-handed beast that would be able to transport anything between dimensions. Legends say that this gigantic creature once carried an entire castle of gold along with it through a hyperspace hole because of its greed. Luckily, this transformation is only temporary; after some time, the Prison Bottle will reabsorb its power and Hoopa will once again become Confined. It is thought that Confined Hoopa passes its time by playing tricks on unwary beings across dimensions.

As Hoopa Confined, when given the Prison Bottle, it grows largely into Hoopa Unbound for three days, or until put in the PC. Hoopa is also known for being able to travel across dimensions with its hoop.

Hoopa appears in Hoopa and the Clash of Ages.

Hoopa is based on traditional depictions of genies, being connected to a bottle and having magical powers. It may also be based on Nezha, a multi-armed trickster deity from Taoism as is often depicted as holding or wearing rings. Its rings also appear to be based on portals or wormholes.

In its Unbound Form, it may take inspiration from Shakti, a Hindu deity said to be made of cosmic energy and have multiple arms. It also appears to be based on depictions of devils due to its horns and sharp-tipped tail.

Hoopa and its Japanese name, Fūpa, derive from hoop and possibly hoopla (commotion). 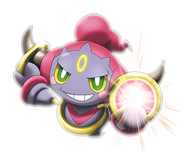 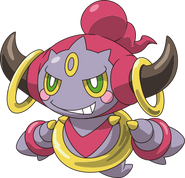 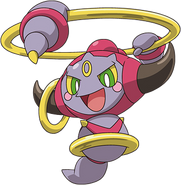 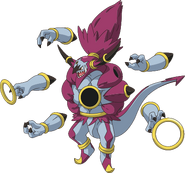 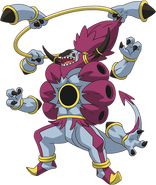 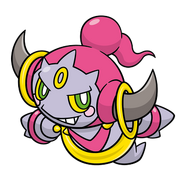 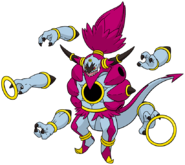 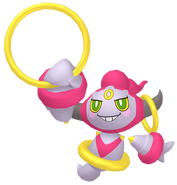 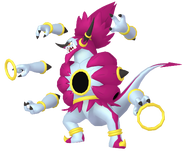 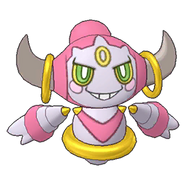 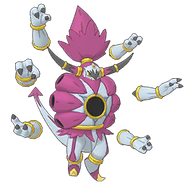 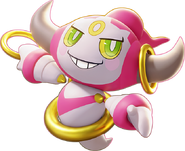