Dahara Tower, Dahara City, Arche Valley
Hoopa, The Mischief Pokémon (おでまし小魔神フーパ) is an anime prequel to Hoopa and the Clash of Ages.

The story takes place when Baraz and Meray, the two who are with Hoopa, were still little. The three of them lived peacefully with the villagers in the Arche Valley, a place far away from where they would eventually meet Ash and his friends in Dahara City. Everyone loves the Rings that Hoopa can use to make anything appear! One day, the three of them help an old woman make something called donuts and Hoopa's eyes light up at the sight of these round treats. However, hijinks ensue when Hoopa decides to use its Rings to help create more donuts...!?

In a desert, after traveling a while, a man sends a Braviary, deciding to go alone. He asks of the woman, Meray, to go with Hoopa to Dahara City. The man, who is Meray's brother, promises to find the bottle and meet with her at the Dahara Tower. Hoopa asks the man, Baraz, to do his best, who leaves off on Braviary. Meray remembers the place she and her brother lived with Hoopa - Arche Valley. The townsfolk have even some minor powers, exclusively tied to the town. One day, during their childhood, Meray was eating a watermelon and spit out a seed, which hit the back of Baraz's head. This is due to Hoopa using its ring to have Meray "attack" Baraz from the back. Hoopa causes a bit of mischief, spitting out seeds at a rapid pace at Baraz, though the ring. Baraz orders Meray to train, should she ever bond with nature, but Meray thought herself as too young for that. However, Meray thinks Baraz is the oldest and has qualities of being "an old man".

Baraz hopes they can make use of Hoopa's rings more effectively. Baraz's friend remembers Old Man Dom's fields are dry, so they could have Hoopa summon rain. At the fields, Old Man Dom wishes some rain for his fields, but Hoopa uses the ring to conjure some candy, which falls down. Hoopa smiles, while Old Man Dom, seeing the children, demands these candies to be returned to Mira. Hoopa is sad, but Baraz and Meray have faith next time the rings will work properly. Mira is not pleased this happened, asking Meray and Baraz to train Hoopa to utilize its rings properly. At any rate, she asks the children to split a giant dough into smaller pieces. The children, including Hoopa, work hard and manage to prepare Mira some slices of dough. Mira is pleased, asking the children to place them in stacks and place some weight on all that. Baraz believes this is bread dough and with this deduction, Meray thinks her brother is really an old man.

After stacking the bread dough and placing wooden plates between them, the children see they need to find a large weight. Baraz, however, asks Hoopa to summon a large rock. Hoopa releases its ring and pulls out a Graveler, by mistake. Graveler lands and crushes a statue. Graveler rolls out, but Hoopa releases the ring, summoning it back to them, then sends it back whence it came from. Since the statue is broken, one of their friends is sent to stall Mira. The others ask Hoopa to find a statue, but Hoopa sends out a wrong statue of a boy. Hoopa repeats and sends out a Phanpy. Baraz asks Hoopa to send out the ring statue, like the ones around the village. Mira opens the door and sees the children did well. She finds the statue a bit odd, but is assured nothing is wrong and returns back. Since that statue is from the square, it is too big to be held and Hoopa sends it back. Hoopa smiles, but Baraz clarifies the statue, the Ring Ivory, broke, which is being held in high regard among the townsfolk.

Meray picks two pieces and realizes they fit together. Baraz asks Hoopa to summon some tools for attaching. However, he is angered Hoopa summons a hammer, some nails and a magnet. Hoopa tries again, summoning a rice ball, some glue, duct tape and other things. After a while, they manage to attach the statue back, but the duct tape is still seen. A piece falls down, but Hoopa uses its psychic powers to lift it. Hoopa lifts the piece and after a purple glow, manages to attach the piece. However, the piece is not placed correctly, so Meray accuses Baraz of rushing Hoopa too much. Mira appears and sees the statue. However, she is not mad, seeing the children at least tried hard to attach it. Mira invites them for some donuts, sweets fried in oil and baked. The children and Hoopa eat and find the donuts tasty. Day after day, the children and Hoopa grew.

Today, Hoopa and Meray arrive to outskirts of Dahara City. Hoopa asks for donuts once they arrive there, while Meray hopes her brother manages to find the item: the Prison Bottle. Baraz, however, flies with Braviary, as the Prison Bottle is wrapped somewhere in darkness.

Baraz practicing his powers while Meray eats a watermelon

Instead of some rain, it is raining candies

The children apologizing to Mira

The children worrying about how to fix the statue

The children found a temporarily item to replace the statue

Meray points out that the statue can be repaired

The children repaired the statue

Hoopa repairs the final piece which fell off

The children apologizing to Mira once again 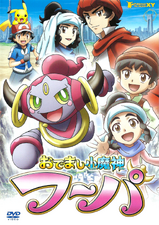 A Japanese DVD cover of the short special
Add a photo to this gallery
Retrieved from "https://pokemon.fandom.com/wiki/Hoopa,_The_Mischief_Pokémon?oldid=1287515"
Community content is available under CC-BY-SA unless otherwise noted.