Honedge is a Pokémon that is based on a haunted sword. It has a single blue eye on its hilt. On the bottom of the hilt is a blue strip of cloth that it uses like a hand to unsheathe its blade. It has an unusual, brown-colored sheath with three holes at the top. When sheathed, the holes make it look like it has a menacing face. When unsheathed, Honedge's blade is silver, and it holds its sheath with the blue strip of cloth attached to the bottom of its hilt.

During the battle, it may be unsheathed from the scabbard. Its sharp blades can cause serious damage.

It is said that Honedge is actually a wandering spirit living inside a normal sword. Honedge is a Pokémon that does not like to be touched, and will not hesitate to use its Ghost-type powers to attack and drain the energy from anyone who disturbs it. If one were to carelessly take Honedge by the hilt, they may find the blue cloth wrapping around their arm, draining the energy from their body.

Honedge can be evolved into Doublade at level 35, which can then evolve into Aegislash via Dusk Stone.

Trainers With A Honedge

Honedge is a combination of hone and edge. 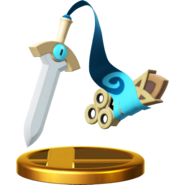 Add a photo to this gallery
← Meowstic | Honedge | Doublade →
Retrieved from "https://pokemon.fandom.com/wiki/Honedge?oldid=1180984"
Community content is available under CC-BY-SA unless otherwise noted.