Hitmonchan (Japanese: エビワラー Ebiwaraa) is a Fighting-type Pokémon introduced in Generation I. According to the Pokédex, it is nicknamed "The Punching Demon".

Hitmonchan's appearance is very similar to a human, when compared to other Pokémon. Its skin is a light brown color. It wears a purple, skirt-like attire and bright red boxing gloves. Its feet are also a purple color, giving it the appearance that it is wearing shoes. Its enlarged shoulders appear as large shoulder pads. The very top of its head is separated into five sections, and its face has visible eyes and a mouth but no nose.

Hitmonchan utilize punching moves to the fullest, far more than any other Pokémon. Its punches can be so quick that it is possible that they are not able to be seen. Hitmonchan can learn all three elemental punches which are strong against elemental Pokémon that are weak against them.

Hitmonchan evolves from Tyrogue at level 20 only when its Attack stat is lower than its Defense stat.

Hitmonchan first appeared in the anime episode The Punchy Pokémon, where it was entered into a fighting tournament under the ownership of a trainer named Anthony. 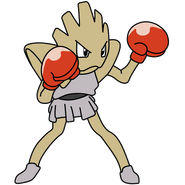 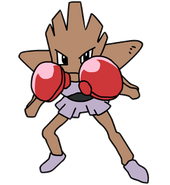 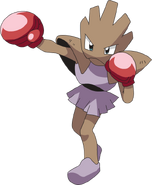 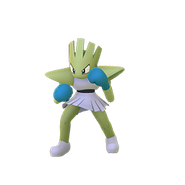