Hiroki in other languages

Hiroki's Z-Ring.
Hiroki is a character who appears in Pokémon the Series: Sun & Moon.

Hiroki battled with his Mudbray against Ash and his Rockruff at the Pokémon School. He eventually lost the battle as Mudbray was defeated by Rockruff's Breakneck Blitz. After the battle, Hiroki thanked Ash for the battle and promised to battle again someday.

In Alola, Kanto!, Hiroki was seen heading to Kanto on the same plane as Ash and his classmates.

Hiroki was one of the Trainers that had his Z-Crystal stolen by a Pheromosa, as revealed in a flashback in Beauty is Only Crystal Deep!.

In Battle Royal 151!, Hiroki was among the 151 Trainers taking part in the Battle Royal preliminary round of the Manalo Conference, which he entered with his Mudbray. After challenging the others to take him on, he was swiftly defeated, becoming the first to be knocked out. In the same episode's Poké Problem segment, he was shown being upset and angry after seeing the Top 16 being announced. 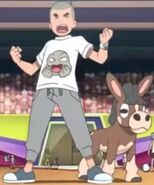 Hiroki and Mudbray
Community content is available under CC-BY-SA unless otherwise noted.
Advertisement