Hilda in Black and White

Hilda is a tall, slender girl with long dark brown hair in a ponytail and blue eyes. Her hat is white and pink with a picture of a pink Poké Ball on it. She wears a white tank shirt that reaches her waist underneath a black waistcoat and a pair of denim shorts with white tear details on them. She wears black wristbands with a small pink stripe on both of them and matching black ankle boots with pink laces and soles, and a pair of black socks underneath. She also carries a pink messenger bag around.

If you choose to play as a female in Black and White, you will get her as the player character. If you choose the male player, you can meet her at the Battle Subway as a partner.

Hilda has gone searching for N in a faraway region, and has not come home yet. Her mother mistakes the player for her. 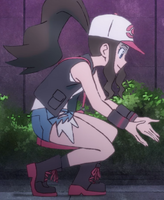