Hilbert in Black and White

Hilbert is a tall, thin boy. He has medium length, messy mud brown hair and brown eyes. He wears a black T-shirt underneath a sky blue jacket that has a sea blue neck and cuffs and a white zip with gray, slightly baggy pants tightened by a black belt with a silver metal buckle. He also wears a scarlet red cap that has a black Poké Ball logo, a scarlet red pair of shoes with black panels and white soles, and on his left wrist he wears a blue Xtransceiver. He carries a black and blue messenger bag with a large white Poké Ball in the center.

Not much is known about his past before the events of Pokémon Black and White. When he was a younger child his father ran out on them to pursue his dream in becoming a Pokémon Master. While fighting Team Plasma, One of the grunts says "Hey kid you look like smaller version of my friend. Are you related to him?" and if you lose the battle, the grunt will say before you black out "You're even as weak as him!" Another reference while talking to Bianca is how they played hide and go seek a lot as little kids and Cheren saying he is too old for that.

This character is mentioned many times in this game, but there is only little information on his location. Sometime after the events of Pokémon Black and White, N came back and Hilbert went to another region (Most likely Johto) to stop him from doing any more harm to another region. The reason why he most likely Johto is because there was a reference saying that he "Disappeared by the ghost towers" The burned tower in Johto is often referred to as the Ghost tower in Pokémon Crystal. It is the tower where the legendary dogs were found. Entei, Raikou, and Suicune. In Pokémon Black and White, an old lady said he was an extremely well legendary Pokémon catcher which most likely means he went to another region to find N but instead got distracted in finding the other regions legendary Pokémon. 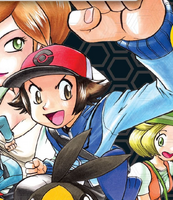