Herdier is a quadrupedal, slightly chubby mammalian canine Pokémon. Most of its body is brown and some parts are dark blue. It has very large ears and what looks like a mustache and forehead hair in the shape of a "W". It has small neat paws and what seems like a blue cover over its body and tail.

Herdier have a docile temperament in general. Although they're not talented at battling, they observe and analyses their opponents calmly before giving them an unexpected attack. Also, they detest evilness and care for their trainers deeply, and they know how to teach their teammates effectively, so they're good choices to be mentors of young Pokémon.They are extremely loyal Pokémon, perhaps even to a fault; Herdier will always obey their trainers’ commands, even if doing so would put them in danger. They are very wary of strangers, however.

On farms, they help herd and defend livestock, while in cities, they are often kept as pets and hailed for their loyalty.

The dark cape-like fur on their backs is tough and hard; Herdier will shelter smaller Pokémon under these capes to protect them from harm. This fur gets both longer and harder as Herdier grow older.

Herdier evolved from Lillipup at level 16. It evolves into Stoutland at level 32.

Herdier is based on a slightly chubby Scottish and/or Yorkshire terrier.

Herdier comes from herder and terrier.

Hāderia comes from herd, terrier, and possibly heart due to its caring nature. 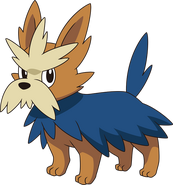 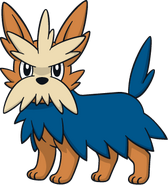 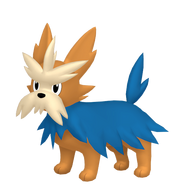 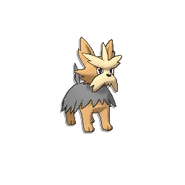 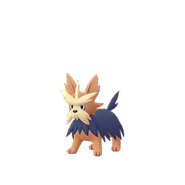