Helioptile (エリキテル, Erikiteru) is an Electric/Normal-type Pokémon introduced in Generation VI. It evolves into Heliolisk by being exposed to a Sun Stone.

Helioptile is a small, yellow, quadrupedal, reptilian Pokémon that resembles a frilled lizard. It has round, blue eyes and long, thin, floppy, deep, gray, ear-like appendages with yellow, triangular tips which dangle from either side of its head. Helioptile's body is mainly bright yellow; its feet, the tip of its long tail and the top of its head are deep gray. Its body is slinky and thin, with tiny clawed feet and a long tail. Helioptile's head is quite large compared to its body. The top of its round head is slightly conical in shape.

A Shiny Helioptile has a bright red body with some yellow patches.

Helioptile absorbs solar rays to generate electricity. It also charges itself in the sun in such a way it doesn't need to eat. Also, when it is attacking, it opens the "ear-like" structures on its head.Helioptile make their homes in hot, flat deserts where there are few trees to block out the sunlight. These Pokémon are adapted to the sweltering, dry conditions of deserts and can survive for long periods of time without drinking water.On cloudy days, Helioptile will hide themselves and lie dormant in order to conserve as much energy as possible until the sun comes out again. Today, modern solar panel technology is based largely upon extended scientific research on the abilities of Helioptile and their evolutions, Heliolisk, to take advantage of the photoelectric effect.

Alexa had the Helioptile who traveled with her from Kalos to Unova.

Clemont once had a Helioptile who he evolved into a Heliolisk with a Sun Stone before traveling with Ash.

Helioptile appears to be based on different kinds of lizards, mainly frilled neck lizards. Its upright position is also similar to the basilisk lizard. Its coloration is similar to that of spotted salamanders.

Helioptile comes from heliophile (something attracted to the sun or light) and reptile. 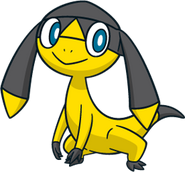 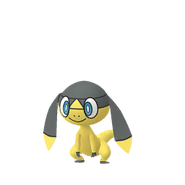