Heliolisk (エレザード, Erezaado) is an Electric/Normal-type Pokémon introduced in Generation VI. It evolves from Helioptile by being exposed to a Sun Stone.

Heliolisk is a large bipedal reptilian Pokémon that resembles a frilled neck lizard. Its slender body is mainly bright yellow, with black patches on the top of its head, its frilled neck, its claws, its feet, and the tip of its tail. The tips of its neck frills are triangular and orange in color, and it has orange stripes around its legs.

When emitting electricity, it extends the frills on its neck, which flare up, resembling a sun-like shape.This allows it to charge itself.they must recharge after such energy-demanding tasks. Heliolisk spend much of their time standing still with their frills unfolded in the sun to gather energy. During mating season, these diurnal Pokémon will unfold and light up their frills to attract mates. Individuals with the largest frills are deemed the most attractive.

An ancient desert culture once praised Heliolisk, believing them to be mystical and connected to a deity they worshipped. When this culture's ruins were excavated by Galarian archaeologists, a number of Heliolisk snuck on board with the unearthed artifacts and made it to Galar, establishing the population that exists there today.

Helioptile appears to be based on different kinds of lizards, mainly frilled neck lizards. Its upright position is also similar to the basilisk lizard. Its coloration is similar to that of spotted salamanders. Its sun motif may come from solar power generation, the fact that many reptiles are exothermic (cannot produce their own heat) and thus tend to stay in the sun, or the fact that the sun is made of plasma (electrically charged gas). Its extended frill also resembles a solar eclipse.

Heliolisk comes from helios (Ancient Greek for "sun"), heliophile (something attracted to the sun or light), and basilisk.

Its Japanese name, Erezādo, is a portmanteau of electric and lizard. 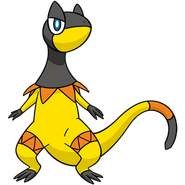 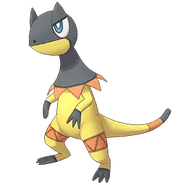 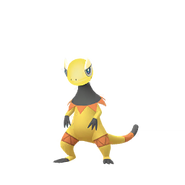