Hawlucha is a bipedal, avian Pokémon. Its underside is mostly white with colorful plumage. It has a mask-like face with green markings and orange around its eyes and top of its head with three orange feathers sticking out. Its eyes have black sclera with yellow irises, and the end of its beak is red and has two nostrils. Its back is red and its wings are cape-like with green underside. Its wings have three claws and are connected to its tail. Its feet are yellow with three toes.

Despite its small size, Hawlucha is capable of fighting other Fighting-type Pokémon. It attacks by staying in their blind spots, such as from above, considering that they are also part Flying-type.

Hawlucha uses its small body frame to tire out larger opponents before finishing them with a flashy and stylish move. However, it tends to become a show-off after performing such a technique and most opponents take advantage of this to win.

Hawlucha is the only known Pokemon to naturally learn Flying Press, a move that does both Fighting-type and Flying-type damage.

Hawlucha is the 3rd Pokémon of Ash's Kalos team which he captured in The Forest Champion!.

Its name comes from the words "hawk" and "lucha", which is from lucha libre (a Mexican-styled wrestling), the type of fighting style Hawlucha is based on. 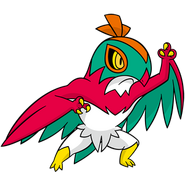 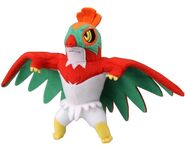