For the variant appearing in the games, see Hau.

Hau in other languages

Hau is a character appearing in Pokémon the Series: Sun & Moon.

Hau is a dark-skinned boy, with dark green hair, which is tied into a short ponytail with an orange band. Hau wears a black shirt, yellow board shorts with orange and white flowers on them and orange shoes and backpack. Hau is mostly seen smiling and being cheerful. Hau wears a silver Z-Ring.

Hau is a cheerful boy, who, unlike other rivals, does not humiliate his opponents, though he can break down into tears when feeling hurt after being defeated. He can be sometimes feeling embarrassed by his doting grandfather.

Hau once fought against his grandfather, Hala, but his Dartrix ended up being defeated by his Crabrawler. Hala stated that Hau had to prepare himself the next time they'd face, since Hala would have to use his very best in testing Hau.[1]

Hau was gone from Alola for some time, but returned with his father to take on the Island Challenge.[1]

Hau was training his Dartrix when the latter bound Ash, Pikachu and Rotom to a tree, thinking of them as its enemies. Soon, Ash and Hau initiated a conversation, where Hau learned that Ash battled his grandfather, Hala, in a Grand Trial. Hau admitted he faced Hala before, but failed; this time, he came back to Alola to complete the Island Challenge. Ash encouraged Hau, and showed Rowlet, who was sleeping. As Dartrix showed some interest, the two guys started a battle, in which Ash attempted to use the Z-Crystal. However, his fingers slipped and Rowlet was defeated. Hau cheered for this fun battle, and decided to take on Ash the next day, since he had things to do with his father. On that day, Ash came with Rowlet late, and apologized, since he was training. This time, Rowlet used Seed Bomb to attack Dartrix, who learned about this strategy and knocked off its Everstone that it launched. However, Ash attempted and succeeded in having Rowlet use Bloom Doom to defeat Dartrix. Hau fell to his knees, but congratulated to Ash for winning the battle. Ash encouraged Hau, who wanted to continue his Island Challenge, and have a Z-Move ready to execute against Ash the next time they'd meet, as the two parted ways.[1]

Before the Alola Pokémon League began, Hau passed Hala's Grand Trial, and earned a Z-Ring from his grandfather.[2] However, Hau felt that this wasn't his ultimate goal, and resolved himself to grow stronger.[3]

Hau greeted Ash, Sophocles and Kiawe at Manalo Stadium, and was accompanied by his grandfather, Hala. Ash and Hau showed their progress: while Ash caught Meltan, Hau showed his new Z-Ring, and his Decidueye, who evolved from Dartrix. Ash woke up Rowlet, who was pleased to see Decidueye. The two sides promised to win, and continued their tour around the stadium. They stopped, until they saw Team Skull trashing the place. Hau, along with his friends, sent his Pokémon, Decidueye, who used Razor Leaf to defeat Team Skull's Zubat. He and the rest watched as Guzma arrived and confronted Kukui before leaving. Hala told him and the rest about Guzma's history, and Hau showed sympathy towards his grandfather. He was also inspired by Ash's speech to keep the Pokémon League safe. During the evening, Hau joined his friends in the opening of the League, and resolved himself not to lose.[2]

Hau participated in the Alola Pokémon League with his Raichu, and won the preliminary round. After the Battle Royale was over, Hau visited Ash, and the two promised to each other not to lose before confronting the other in the tournament. When he learned he would face Samson Oak in the next round, Hau smiled.[4] Hau and his Alolan Raichu faced Samson Oak and Alolan Exeggutor in the first round of the Pokémon League. Raichu evaded Exeggutor's attacks, and defeated it with Focus Blast. Samson Oak evaded getting crushed by Exeggutor, who fell on the ground, while Hau cheered for his victory.[5] With the first round over, Hau would face Ash in the next round. Hau and Decidueye visited Ash, whose Rowlet started arguing with Decidueye, as it was very inspired to battle it.[6]

Hau and Decidueye awaited Ash and Rowlet in the waiting room before the battle. They got a bit surprised not to encounter them there, but a moment later, they saw the two running to them. Hau became amused to see Rowlet dressed as Decidueye, and explained he wanted to become stronger than his grandfather, Hala. Ash nodded, and swore not to lose, to which Hau smiled. Suddenly, the boys were asked to go to the battlefield, as the audience was waiting for them. On the battlefield, Hau sent Decidueye against Ash's Rowlet. Ash's Rowlet used Bloom Doom, which Decidueye evaded. Hau exclaimed he had studied Ash's moves, and bound Rowlet with Spirit Shackle. Decidueye went to use its Z-Move, Sinister Arrow Raid, which attacked Rowlet. However, Rowlet became unhurt by the attack, as the Z-Move hit the cloak that he left behind.[3]

Hau continued having Decidueye attack Rowlet, having his attacks blocked to prevent a clear victory from Rowlet's Brave Bird. Rowlet attempted to use Feather Dance, but failed and got slammed to the wall by Leaf Blade. Hau had Decidueye use Sky Attack, which collided with Rowlet's Brave Bird. The two sides fell down, but only Decidueye stood back up. As Rowlet was still lying on the floor, Hau cheered, as he and Decidueye have won the battle. However, Hala stood up, and pointed out that Rowlet merely fell asleep, much to Hau and Decidueye's shock. Ash woke Rowlet up, and apologized to Hau, who stated Ash and Rowlet always took them off guard. To finish Rowlet off, Decidueye used Spirit Shackle to bind Rowlet, and used Sky Attack. However, Rowlet made a dummy of itself using Feather Dance. Decidueye mistakenly attacked the dummy, and as it was distracted, Decidueye got defeated by Rowlet's Brave Bird. Hau was disappointed, but congratulated Ash and Rowlet for their victory. After the battle, Hau met up with Hala, and admitted Ash and Rowlet were an amazing duo. Hala stated that Hau fought bravely, too, to which Hau started to cry.[7]

Hau was among the audience watching the semi-finals, featuring Gladion and Kiawe.[8] Later, Hau was watching Ash's battle against Guzma.[9][10] When the MC described Ash's victories in the Alola Pokémon League, he reminisced about Hau and Decidueye.[11] Hau attended the final ceremony, where Ash was given the Championship Cup. He was surprised to see the Ultra Beast, Guzzlord, having descended from Ultra Wormhole.[12]

The Island Kahuna asked of Hau and the rest to evacuate the audience to the docks. Hau did so, and once the task was complete, he came to Kiawe and Gladion, who faced a white Guzzlord. Gladion asked of them to retreat, as it was too dangerous, but Kiawe and Hau stated they wouldn't let Gladion battle alone. Gladion blushed, and let them accompany him. Gladion's Lycanroc use Stone Edge to knock Guzzlord down, while Kiawe and Hau sent Turtonator and Decidueye to battle, and had them use Flamethrower and Razor Leaf on Guzzlord to distract it. However, the attacks were not powerful enough to blow Guzzlord away, so Hau had Decidueye hold Guzzlord's claw and Kiawe's Turtonator used Focus Blast to distract it. As Gladion went to have Lycanroc use its Z-Move, Guzzlord uttered a roar that nearly blew the trainers away. Guzzlord attempted to attack them with its claw, but Lillie, Mallow, Lana and Sophocles arrived, and had their Tsareena, Primarina and Vikavolt attack Guzzlord to prevent its attack. Hau, Gladion and Kiawe thanked them for saving them, and the seven trainers used their Z-Rings, blowing away the Z-Moves (with Decidueye using Sinister Arrow Raid). The attacks overpowered Guzzlord, who was blown through the Ultra Wormhole. As the Ultra Wormhole quickly closed, Hau and the rest cheered for their success.[13]

The next day, Hau and Decidueye were watching the exhibition match between Ash and Professor Kukui.[14][15][16] Hau was intrigued to see Tapu Koko's Guardian of Alola Z-Move, which represented a giant, colliding with Ash's Pikachu's 10,000,000 Volt Thunderbolt. At the end of the exhibtion match, Hau and Decidueye were happy to see Ash having won the battle.[17] With Ash's departure from Alola region, Hau, supported by his grandfather, took on Nanu's Grand Trial, using his Decidueye against Nanu's Persian.[18] 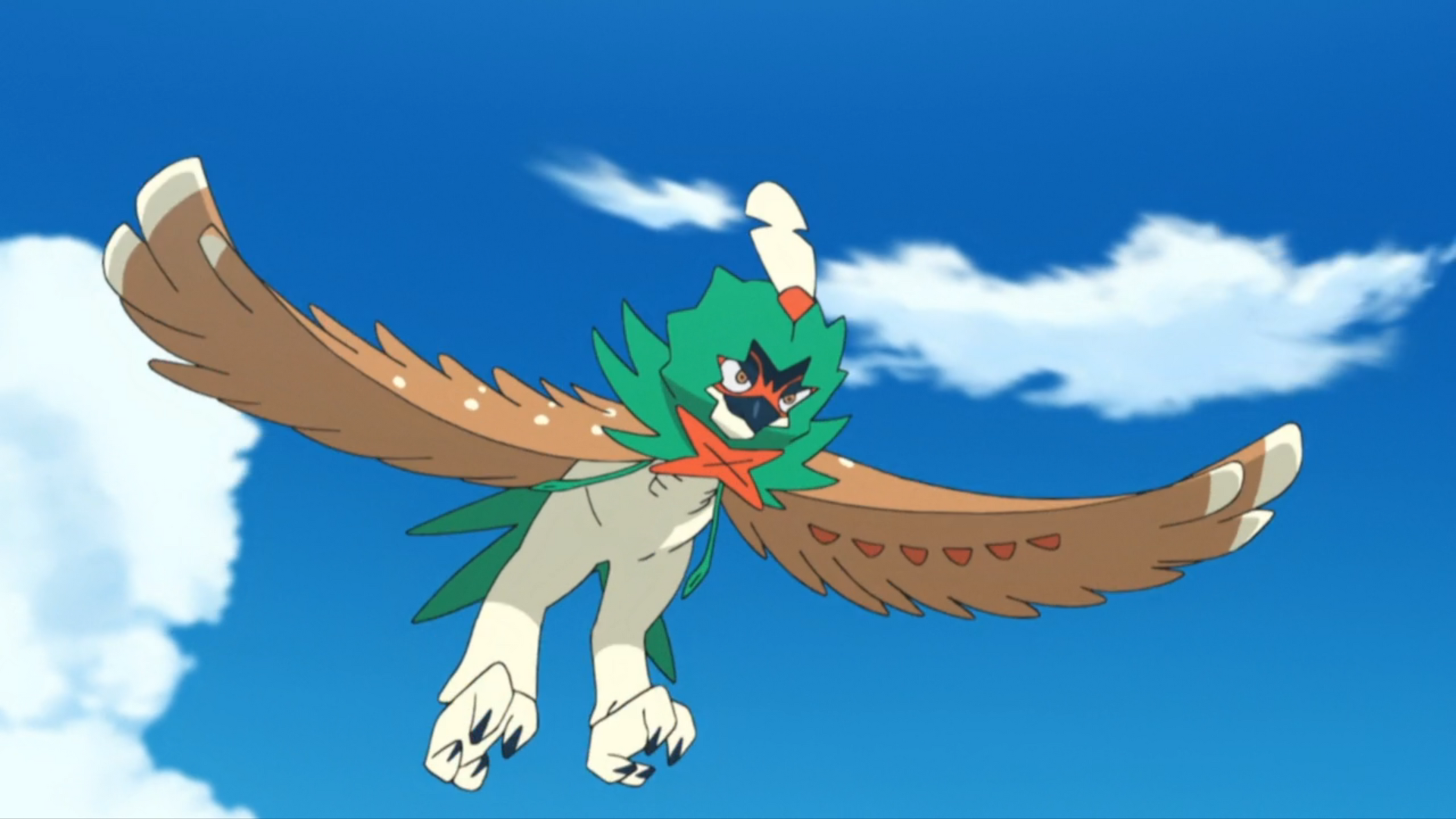 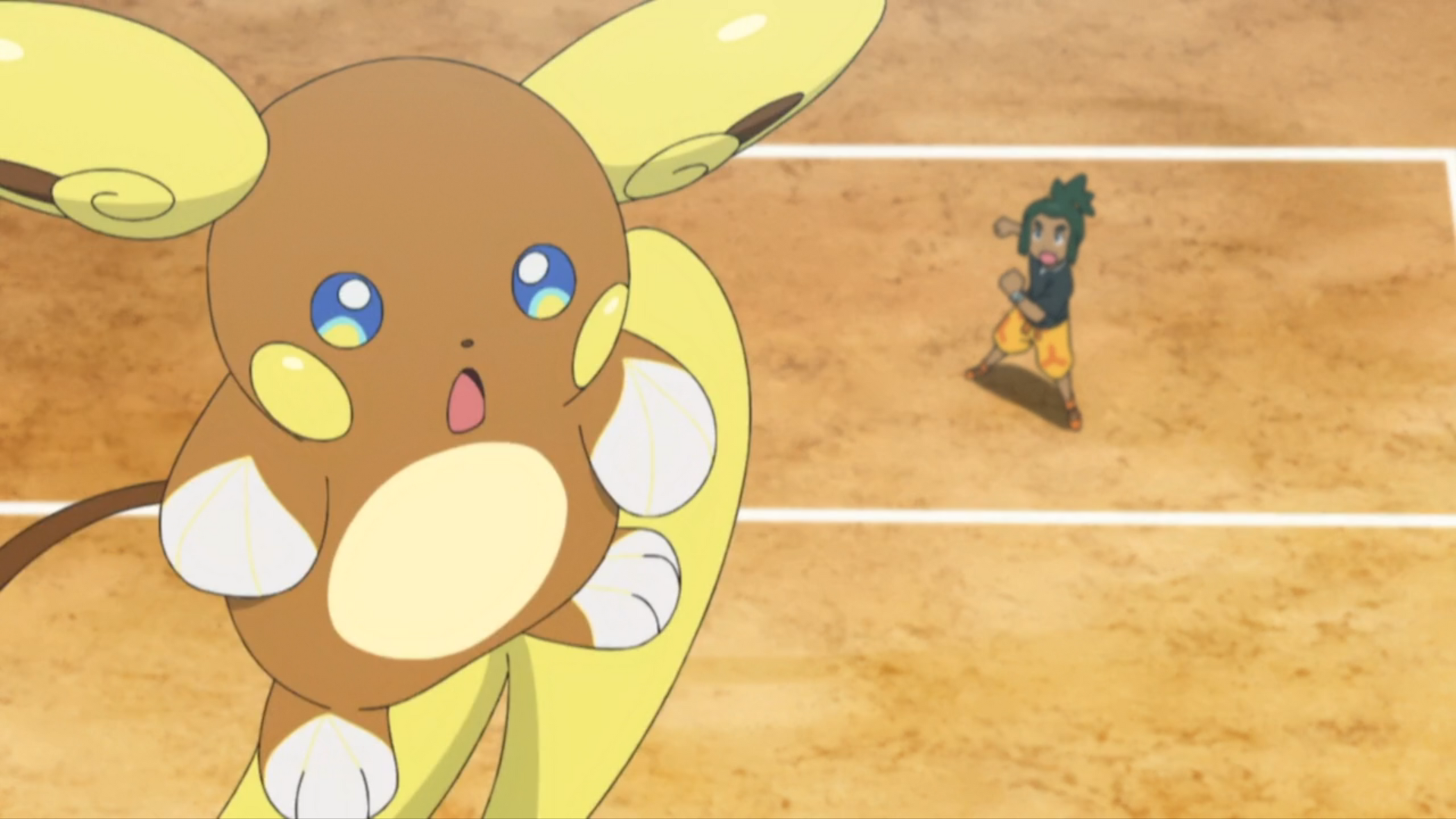 Retrieved from "https://pokemon.fandom.com/wiki/Hau_(anime)?oldid=1371184"
Community content is available under CC-BY-SA unless otherwise noted.