Hau is character who appears in the Pokémon games, Sun and Moon, as one of the main rivals of the games.

Hau is a dark-skinned boy, with dark green hair, which is tied into a short ponytail with an orange band. Hau wears a black shirt, yellow board shorts with orange and white flowers on them and orange shoes and backpack. Hau is mostly seen smiling and being cheerful.

He is a big-hearted boy, who really loves Pokémon for the majority of time. Though, this is because, when Hau was a young boy, he spotted Hala in a furious state, which scared him, to the point of even crying in fear. As Hala's actions couldn't comfort him, he decides to be "soft" with him.

The name Hau comes from hau, the Hawaiian name for the beach hibiscus flower.

Hau in Pokémon the Series (anime) 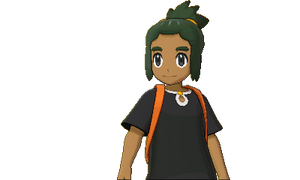 Hau's VS sprite in Sun & Moon