Hattrem is a small, pink, and vaguely humanoid Pokémon. Its hat is blue, white, and pink, resembling a brimmed witch hat. On the back of the hat are two small, braid like appendages that it uses as feet.

Strong emotions can trigger this Pokémon to go into a violent state, presumably injuring the person feeling these emotions, or possibly worse. Hattrem also dislike noise and will similarly seek out loudmouths and get them to pipe down, with force if necessary.

Some people joke that their moniker “the Serene Pokémon” is quite unfitting for such an irritable species. In fact, they were named this in reference to the quiet, peaceful environments that they create around themselves through such policing action. In regions where Hattrem dominate, other Pokémon live in silent fear of their retribution—though not too much fear, so as to not trigger their dislike of strong emotions. Hattrem in such regions will often be working alongside a powerful Hatterene to rule the entire woodland.

They can use their braids like very dangerous weapons. One blow would knock out a professional boxer.

Hattrem is based on witches and fairies, though it is mostly based on the witches' hats' brims. It may also be based on a witch's ladder, a charm created with a witch's hair that consists of winding hair and beads, with Hattrem's ponytails being the hair and the rest of its head being a bead.

Hattrem comes from "hat", "hatter", "hatred" (referring to its dislike of strong emotions), and "tremble". 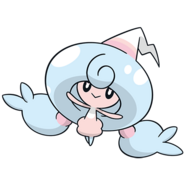