Hatterene is a small, vaguely humanoid Pokémon with long hair colored in a gradient of pale pink, baby-blue, lavender, and white. The hair above its head is in a conical shape, resembling a witch's hat. Hatterene has a three-fingered tentacle that extends from the tip of its hat. Its purple body is adorned with a pink semi-translucent dress. Hatterene is a female-only species.

Hatterene are very sensitive to noise. If somebody starts being too loud around a Hatterene, it tears them apart.

Hatterene constantly emit a low-level of psychic energy to induce headaches in strangers that come too close to their territory. Indeed, an unnatural quiet and a tingling sensation in the head is a good sign that a Hatterene is near. Many legends surround these Pokémon and their elusive nature. For instance, it is said that while Hatterene will usually mercilessly bewitch travelers who intrude upon their territory, they will make deals with those that they find "tolerable." If a Hatterene shows a willingness to bargain, one should never renege on the deal. Hatterene will exact terrible vengeance on those that betray them.

They can emit psychic power that causes headaches in those nearby. They can also levitate and teleport in short distances. The claw-like tentacles atop of their heads can perform powerful rips that tears victims apart.

Hatterene is based on the belief that a witch's power is connected to its hair. Hatterene may also be based on the Hachishaku-sama, an 8-foot tall woman wearing a hat who kidnaps children who cry when they get lost in the forest, similarly to how Hatterene viciously attacks where it senses strong emotions. Its appearance may be based on a Witches Ladder, a magical charm made of a witch's braided hair. Hatterene's small appearance inside of a tall body may take inspiration from the common tale of a princess trapped in a tall tower, most specifically Rapunzel, a princess who's long growing hair was long enough to reach the bottom of a tower. Its "clothes" actually being its hair may also be a reference to the Bayonetta series of video games, in which the protagonist and titular character is a long-haired witch whose clothes are actually her hair. Its lower body also gives the appearance of a broom, a tool frequently utilized by witches in media as a form of transportation by flight.

Its Gigantamax form has traits of squids, which are normally seen as high intellectual creatures, highlighting its Psychic type, which is generally considered as the intelligence type.

Hatterene comes from the words "hat", "hatter", and "serene".

Burimuon is a portmanteau of "brim" (of a hat) and "無音" (muon, Japanese for "silence"). As its Gigantamax form's Pokédex entry in Shield mentions how the beams it shoots are like lightning, the "muon" in its name may also be in reference to muons, particles closely related to electrons. 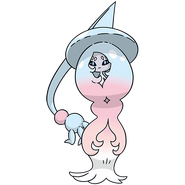 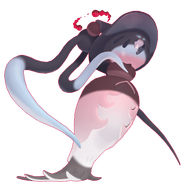