Hatenna is a round pink Pokémon. It has a pair of stubby feet and no visible eyes. Its hair is blue and curly, and it has a pink antenna on its head resembling a hat. The hat has two white spots on it with a blue tear drop-shaped bulb at its tip.

Hatenna dislike people and live in secluded areas. If one senses emotions, it will scurry and hide. It is because the protrusions on their heads can sense emotions like radars, causing the Pokémon great distress when near sources of passion. This sensory system helps them detect predators who mean them harm well before they draw near.

Hatenna seem especially sensitive to the feelings of people, and even more so towards hostile emotions. This has historically made them excellent warning systems for other woodland Pokémon to signal the approach of human trappers and hunters. When cornered, these Pokémon will release a burst of psychic energy to stun attackers before fleeing deeper into the wilderness.

Hatenna raised by short-tempered trainers can grow up traumatized and unable to form bonds with others. Even well-meaning, but excitable trainers can cause their Hatenna unnecessary stress. For this reason, trainers seeking to raise these Pokémon must receive a psychiatrist-granted license ensuring their temperamental suitability. Hatenna, once bonded with even-tempered trainers, have a charming tendency to perch themselves of their trainers’ heads.

Hatenna and its evolutions are based on common depiction of witches, particularly witches' hats.

Hatenna comes from the words "hat" and "antenna". 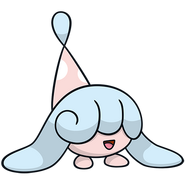 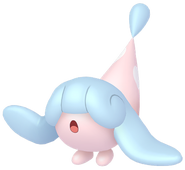