For the variant appearing in the games, see Harper and Sarah.

Harper and Sarah in other languages

Harper and Sarah are characters appearing in Pokémon the Series: Sun & Moon, who are the younger twin sisters of Lana.

Harper and Sarah are similar to their elder sister Lana, appearing to be like miniature versions of her. Both wear small yellow headbands on their heads.

When they meet a new Pokémon, they become very curious and excited, often getting carried away in what they're doing, but they can be very helpful when they want to be. They are often shown to be very hyper children with a great love for Pokémon. They sometimes have a habit of unintentionally embarrassing their older sister Lana and are scared when she gets angry at them.

In Yo, Ho, Ho! Go, Popplio!, Harper and Sarah greeted their older sister and Ash when they came to visit Lana's home. They immediately took a liking to Ash's Pikachu and brought him to their room. The twins then started to pull on Pikachu's face, much to his dislike. Harper and Sarah asked Lana if Ash was her boyfriend, causing her to quickly deny it. Pikachu soon started to get uncomfortable with the twins and used Thunderbolt on everybody in the room.

They made a reappearance in Getting the Band Back Together!, where they watched a concert performed by DigDugLeo on television with their sister Lana.

Harper and Sarah also came to the open house at the Pokémon School in Alolan Open House!, where they got so overexcited about seeing all the new Pokémon at the school that they were soon carried away by their mother.

When Lana switched her Popplio with Kiawe's Turtonator in The Ol' Raise and Switch!, the twins became amazed at Turtonator's size, and Lana told them to be nice to the Blast Turtle Pokémon, which they agreed to. Sometime later, they were seen jumping on Turtonator's back, and their sister warned them not to touch his spikes. However, they did just that, causing the shell to explode, but the twins took it as a fun surprise. Harper and Sarah also helped Lana with brushing Turtonator's back. 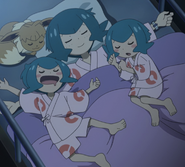