Hariyama appears to be based on Japanese Sumo wrestlers. Its cry can be interpreted as a Sumo wrestlers grunt before a fight. It is a large bodied Pokémon, with three fingered hands which it uses to attack its opponents by thrusting its arms. As a result, it can learn such moves as Arm Thrust, and Force Palm.

It likes to match power with other big-bodied Pokémon, and can stomp the ground to build its own power. Trucks can be sent flying, telephone poles broken in two, and trains can even be stopped by its powerful arms.

It lives in mountainous areas.

Hariyama evolves from Makuhita at level 24.

Hariyama is based on a sumo wrestler.

Hariyama can be translated into "pincushion", a rank in sumo wrestling. It may also come from harite (a hand-slap move in sumo wrestling), yama (mountain), hariau (to compete with), and haritaosu (to knock down). 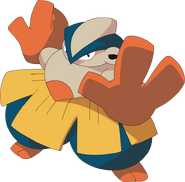 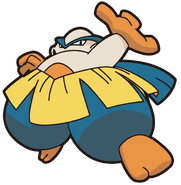 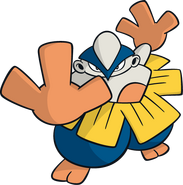 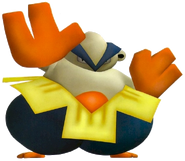 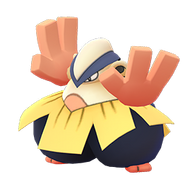