For the variant appearing in the games, see Hapu.

Hapu is a character appearing in Pokémon Adventures.

Despite being the newest Island Kahuna, Hapu lives up to her duty to protect the people on the island. It is her will to be recognized by the Guardian Deity worth being the Island Kahuna.

Hapu was elected by Nanu, Olivia and Hala as the new Island Kahuna of Poni Island. Hapu, however, went to rescue Sun, who was beaten by some Crabrawler, led by a Crabominable. She had Mudsdale defend Sun from his enemies, seeing that he was not from Poni Island for venturing into Crabrawler's lair. Sun exclaimed they stole his rare berry, while the person noted the Crabrawler were vicious, stealing a man's house and the berries they hoarded. Sun refused the help of "granny", which insulted Hapu. Since she could not carry Sun around, she touched the Page Rider, summoning a Machamp, who carried Sun around. Sun didn't wish to leave his delivery package, the Mirage Berry, so Hapu, as the Island Kahuna, swore to help him out to get acknowledged by Tapu Fini.[1]

She informed Sun that she had been recently elected by Hala, Nanu and Olivia to become Poni Island's newest Kahuna. Her Mudsdale attacked the Crabrawler, which were quickly defeated. Hapu found it impressive that the Crabominable picked a good time to attack, and had Mudsdale return the damage with Counter. The attack landed in Crabominable's eyes, and Hapu wanted to know if Tapu Fini, who was actually looking at her battle, thought of her as a good Island Kahuna. Sun attempted to have Dollar retrieve the Mirage Berry, but Crabominable punched it, Sun and his Machamp out of the house, into the sea. Crabominable was distracted, and Hapu's Mudsdale used Mud-Slap to blind it. However, the mud didn't affect Crabominable's accuracy, and it landed a strong hit on Mudsdale. Sun tried insulting her to motivate her to fight, and Hapu saw that the next attack would determine the winner. Crabominable went to attack Musdale, but it missed its target: Sun had Machamp lift the entire boat, so that Crabominable would miss. Quickly, Hapu had Mudsdale defeat Crabominable with Mega Kick. Since Sun was too wounded, he had Hapu pass the Mirage Berry to Tapu Fini. However, the latter gave Hapu the Sparkling Stone, which made Hapu cry in happiness.[2]

Hapu could not contact the other Island Kahuna, which shocked Sun, who was counting on a reward. Hapu felt she could not be a proper Island Kahuna without knowing how to craft the Z-Rings. Sun explained the Ultra Beasts came on the other islands, and Hapu saw that she could wish luck to her colleagues. She wanted to tell someone long-dead that she became an Island Kahuna, much to Sun's shock. She clarified that the person was her grandfather, who had passed away, and was the person that had motivated her to become an Island Kahuna. Sun decided to pay respects with her, and accompanied her to Vast Poni Canyon, considering he still had to find Zygarde Cells. However, Hapu also pointed at Crabominable, who was following them. Since Hapu had her hands full with training her Pokémon, Sun welcomed Crabominable, and was not angry that the latter hit him earlier, and captured it. Before they continued on, Hapu asked if Sun knew how to play instruments, and showed a Moon Flute. Eventually, they saw two Cosmoem in the sky, facing each other.[3]

Hapu and Sun saw the two Cosmoem. To explain what a Cosmoem was, Hapu showed a picture to Sun about that Pokémon, and added it had the power to create holes in the sky. Sun noted it looked like Lillie's Nebby, and believed the other one must've been Guzma's Cosmoem, who had evolved. To continue, Hapu spoke of the legend of the emissaries of the sun and moon, and Sun noted the two must've been Ultra Beasts, since they came from the hole in the sky. She remembered her grandfather telling her to play flutes at the altar, in relation to this story. Suddenly, the two were stopped by Aether Foundation employees, who wanted to extort more information from Hapu. Hapu refused to say anything more, and a battle seemed imminent. Suddenly, Gladion and Lillie came to Sun and Hapu, as the two defeated Lighting. The employees, upon seeing Gladion and Lillie, fled, leaving the siblings confounded about what just happened. Sun was shocked the two were siblings, while Hapu was curious about Lillie's flute. Upon a brief explanation, Lillie told Hapu she did not know from where the flute came from, and did not know how to play it, either. Since Gladion failed to play the flute, Sun made the attempt, and much to everyone's surprise, managed to perform the music well. Suddenly, the group was approached by the four Guardian Deities. Just as Sun was taken away, Hapu and the rest decided to follow him.[4]

Hapu witnessed the evolution of the two Cosmoem into Solgaleo and Lunala, whom Hapu knew they were the emissaries of sun and moon from the legend. As the army of the Ultra Beasts approached Poni Island, Hapu sent Mudsdale to fight them off.[5]

With the arrival of the Ultra Beasts on Poni Island, Hapu started her training to fight them.[6] Hapu, along with Hala and Wicke, listened to Guzma's story how he returned to Alola, and witnessed Lusamine's obsession towards the Ultra Beast, Nihilego.[7]

At Hokulani Observatory, Hapu was pleased to see Kiawe having gotten his Z-Ring back. Sophocles led Hapu and the rest to the Vikavolt airship, which he redesigned from the machine that could summon Totem Pokémon. Hapu claimed she could only ride her Mudsdale, so Sophocles' Togedemaru electrocuted everyone to go inside. Inside, the group revised that the crack in the sky had been opened at Mount Lanakila, and suspected that Sun and Moon came out. Molayne reminded they would have to fight the Ultra Beasts, but exclaimed the importance of rescuing Sun and Moon out of there. Suddenly, the airship got hit. The Vikavolt airship crashed, as they were attacked by the Ultra Beasts, and the Aether Foundation employees.[8] With the appearance of the four Guardian Deities, Lana and Hapu went out of the aircraft and started to battle the Ultra Beasts. They confronted a Blacephalon, and had their Araquanid use Hydro Vortex and Mudsdale use Tecronic Rage Z-Moves, which defeated Blacephalon. Lana was pleased, while Hapu cheered for their success.[9] 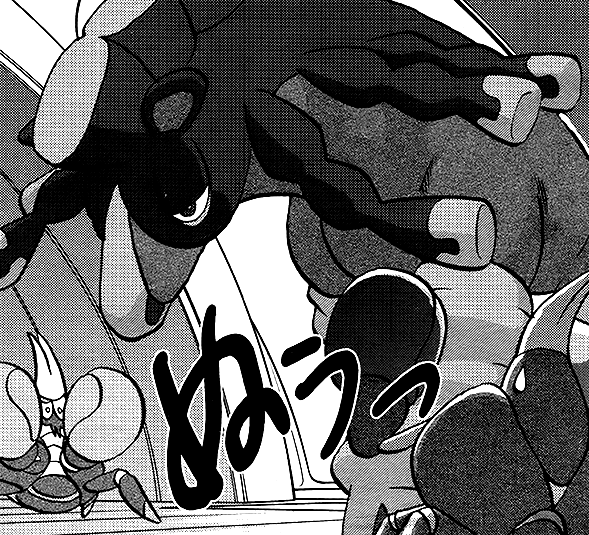 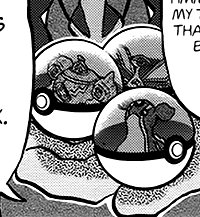 Retrieved from "https://pokemon.fandom.com/wiki/Hapu_(Adventures)?oldid=1262425"
Community content is available under CC-BY-SA unless otherwise noted.