Hapu is a very short and skinny girl with tan skin, gray eyes, and slightly rosy cheeks. Her black hair is very long and comes down in two huge braids; additionally, she also has thick, bushy eyebrows. Clothing-wise, Hapu wears tough clothes that are suitable for working and add to her already dwarf-esque appearance. Her outfit consists of a short-sleeved khaki shirt, matching khaki pants that are very baggy and have purple designs on the knees, and black rubber boots. For accessories, she wears a large purple bonnet that's tied around her chin, a skinny black belt that only goes through one loop, and purplish-gray gloves. She also carries around a small purple pouch that she secures with her belt. 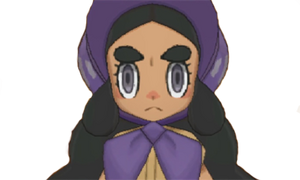