Happiny has a pink, egg-shaped body. She has a red pouch that covers the bottom half of her body. In the red pouch there is an egg which is the white stone. It sometimes gives the stone to who it likes. There are three round bumps on Happiny's forehead, and she has a pigtail of hair on her head. Happiny has stubby limbs and is normally seen carrying an Oval Stone in her pouch. 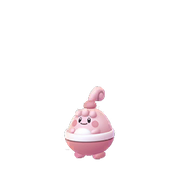