Halsey is a character appearing in Pokémon: BW Adventures in Unova and Beyond.

Halsey is the leader of the rescue squad, the Harbor Patrol, of Virbank City. The heroes came one day and witnessed Halsey's training, but N sensed Halsey's Watchog wanted to actively participate in the squad, rather than deter people from entering the area. Halsey put Watchog through some tests, but Watchog failed the last one. Afterwards, Halsey was sent on a mission to put out a fire in industrial section. Halsey evacuated the workers and put out the fire, but Team Rocket, by accident, created a new fire. Ash's Oshawott tried to put out the fire, but failed and Halsey was trapped inside the building. However, Watchog sensed where Halsey is located, so N gave Iris instructions, who gave orders to Excadrill where to dig. Halsey was soon rescued and he put out the fire, then thanked Watchog, who did this job out of its own will to rescue people and Pokémon alike. 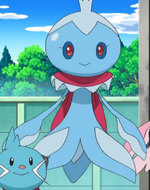 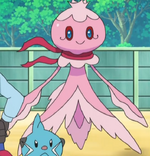