For the variant appearing in the games, see Hala.

Hala is a character appearing in Pokémon Adventures.

Hala is a stocky old man, who has white hair tied in a ponytail similar to his grandson Hau, as well as white eyebrows and moustache. He wears a blue shirt under his yellow jacket with flower pattern, a shirt tied in a knot over a red and white fan. He also wears white shorts and white/blue flip-flops. In addition, Hala has squinty eyes.

Hala is a strict, authoritative individual, who enforces rules, expecting people to abide them.

Hala tutored one of the trainers about battling, who became a member of Team Skull. Hala regretted not teaching that person that winning and being the best was not everything to battle.[1]

Hala went with Guzma to another region, where they were having Pokémon battles.[2]

Hala invited Olivia and Nanu to a meeting. Nanu asked if the there was no Kahuna for the Poni Island, which Hala confirmed. The Kahuna reported seeing the Tapu Pokémon: Tapu Bulu, Tapu Fini, Tapu Lele and Tapu Koko. Hala recalled these island guardians usually lived in the caves and explained they were angry.[3] Olivia had a battle against Nanu, while Hala was watching them. Hala was in shock, as Nanu insulted Olivia, who became furious and used her Z-Ring to have Lycanroc use Continental Crush, while Nanu did the same with Persian, who used Black Hole Eclipse. Hala interfered, causing Lycanroc to hit him with the Z-Move. Olivia and Lycanroc regretted this and started to apologize, while Nanu shook his head. Hala was nevertheless impressed by the platform, as the youth, the following day, would battle in the Festival. Hala also told the winners would go to face the Tapu Pokémon and try calming them down. Nanu saw that was imitating the island's tradition, while Olivia saw they, as Island Kahuna, couldn't face the Tapu Pokémon twice, nor could the Trial Captains. Nanu also questioned if it was a wise plan, since they didn't know why the Tapu were angry. Hala replied he had a back-up plan and contacted Kahili to come to help them. He reminded them this was an Alolan problem that had to be solved by Alolan people.[4]

Hala saw a Team Skull grunt arguing with Sun. Sun sent Dollar and Cent to battle against the grunt's Pyukumuku, so Hala had Bewear stop their battle, since they would be fighting later-on. After Olivia and Moon delivered the malasada to the participants (to match-up the challengers), Hala declared the start of the tournament. He noted one was missing; the boy, Gladion, arrived, apologizing for being late. Hala also had Samson Oak serve as an additional judge for the battle. With Sun and the Masked Royal on the platform, Hala had them battle in the first round.[5] Hala continued watching the battle between Sun and the Masked Royale. When the two, including their Pokémon started to fight each other in an unhonorable way, Hala declared he'd disqualify both of them if they wouldn't fight properly. Sun and the Masked Royale requsted to see the reward for the battle, to motivate them. Hala grudgingly showed them the symbol for the Island Challenge. Hala continued to watch and, along with Samson, voted that Sun would be the winner of the battle. Hala also stopped Nanu from interfering the battle between Hau and Gladion. Hala was also in shock that Guzma came and attacked the Team Skull grunt. Guzma decided to participate in place of the grunt, a choice Hala had to accept, since they let Moon participate in Lillie's place.[6]

As Guzma had Golisopod lift Sun up, Hala intervened, as he refused any battles outside the tournament. Guzma simply had Golkisopod throw Sun on the plateau, to get Sun "ready" for the battle. The Masked Royal approached Hala, admitting he thought the reward for winning the tournament would be to battle the Island Kahuna. Hala was honored, and recalled Professor Kukui and Molayne were the last ones that finished the Island Challenge. However, Hala told nobody took on the Island Challenge for several years. The Masked Royal wanted to know why did Hala brought the Island Challenge through the tournament. Before Hala could answer, he had to go to the stage to monitor the battle between Guzma and Sun. As Sun had his arm hurt by Guzma's Golisopod, Olivia asked of Hala to stop the tournament, fearing Guzma could even win. Hala decided not to, as they needed strong people for the Island Challenge. With Guzma's defeat, Moon and Gladion came to the stage for battle. Moon sent Mareanie and Grimer. Hala reminded Moon she had to conduct a Single, not a Double Battle, but Moon replied she only wanted to show her Pokémon to Gladion.[7] As Gladion defeated Moon, Hala proposed a 30-minute break. Gladion, however, wished to fight Sun in the finals right away, so Hala started the battle. Hala and the Masked Royal continued to watch the battle, and were in shock when Sun's bandages came off, revealing a Sparkling Stone. They watched as a vortex shot a beam through Sun's stone and powered his En up.[8] While Sun was unconscious, Hala declared him to be the winner, since he possessed the Sparkling Stone.[9]

Hala called Sun and the group through a monitor, and congratulated the latter for the victory on the tournament. He admitted he was worried when Sun used the power of the stone that came out of the bandages Sun had. Sun told he would've returned the stone to Tapu Koko, who gave it to him, though Hala informed him Tapu Koko actually entrusted Sun with the stone, named Sparkling Stone. Sun immediately wanted to sell the Sparkling Stone, but was told Hala was actually modifying the Sparkling Stone and would return it to Sun later on. Hala claimed there was nobody else more fit for the task; he explained the victor of the tournament obtained the Island Challenge amulet, which meant that Sun took on the duty. Hala continued explaining that the Tapu Pokémon had sensed danger coming to Alola and were enraged, hence it is up to Sun to calm them down. Sun was furious, since he never was told about this before, as it is more of a punishment than a reward for winning the tournament. In addition, Sun stated he needed to earn the 100 million yen for his debt. Hala calmed Sun down, and decided to turn the Island Challenge as a job: Sun had to deliver the Mirage Berry to all Tapu Pokémon, in exchange for a reward, with any expenses covered. Sun immediately changed his mind and took on the job as a Courier. Hala logged out, promising to call them when he would finish the work on the Sparkling Stone.[10]

Hala finished his work when Kahili. Hala welcomed her, as she reported a Tapu Pokémon was seen on one of the islands.[11] Hala welcomed Kahili, who came from a golf tournament in Kalos, in which many golfers from other regions participated. After watching TV, Kahili showed Hala her broken golf clubs, which she used to fight off creatures at Melemele Meadow. Hala was astonished by the news, and Kahili wondered if the Tapu Pokémon were enraged because of those creatures appearing in the region.[12] He sent her to deliver the Z-Ring he crafted from the Sparkling Stone to Sun.[9] Hau wanted to accompany Ilima to face Team Skull, since he wished to help Hala, whom he overheard speaking to Nanu and Olivia, to find the person he tutored and help them realize that battles were not just about winning.[1]

Hala talked to Nanu and Olivia, and the three agreed to have Hapu as the new Island Kahuna of Poni Island. As Hala proceeded to phone her about the good news, Nanu decided to leave, since he wished to take part in the fight with the Trial Captains against the Ultra Beasts. However, Nanu was nearly assaulted, as two Ultra Beasts, which had attacked Kahili, destroyed a part of Hala's house. Hala ordered Olivia and Nanu to return to their islands, as he stood his ground firmly to defend Melemele Island. He had Bewear use Hyper Beam and Hariyama to use Close Combat, causing an explosion.[13]

With the arrival of the Ultra Beasts on Poni Island, Hala started his training to fight them.[14] Hala, on Exeggutor Island, left Nanu in charge of training the Trial Captains. Hala, along with Hapu and Wicke, listened to Guzma's story how he returned to Alola, and witnessed Lusamine's obsession towards the Ultra Beast, Nihilego.[15]

When Guzma woke up, he looked at Hala, who became silent. Guzma was riled up, feeling as if Hala was disapproving of him. Guzma also looked at Hau, and told him he should seek his own destiny out if he didn't care about Alola's traditions, even if he was Island Kahuna's grandson, else he would become like Guzma. When Hala and Hau went out of the tent, Hau gained his grandfather's attention about training, since he was not permitted to train with the Trial Captains. Hau smiled, and admitted he wanted to join the fight to save Alola. He knew that Hala thought he was not ready for the fight, and showed his progress in the past six months: he got a Z-Ring and evolved his Pokémon. Hala changed his mind, and decided to train his grandson.[16]

Hala was training Hau on Poni Island's Resolution Cave. The latter's Brionne defeated Hala's Bewear. Hala applauded Hau for the victory, whose Primarina evolved. Hau attributed this success to Hala, who stated Hau was the one who raised Primarina well. Suddenly, Hau stopped, as he was reminiscing about what Guzma had said. He told it was Guzma's fault to be so antagonistic towards everything. Hala stated he believed that problems in Alola region should be solved by its people. He believed people like Hau or Guzma could even be Island Kahuna, to which Hau doubted Guzma would take on that role. The two laughed, and as they were going to Mount Lanakila, they witnessed Tapu Fini getting attacked by Buzzwole. They were contacted by Olivia, who filled them in what happened with them and the Island Kahuna on Mount Lanakila. Olivia asked Hala to protect Poni Island, and logged out. Without further ado, Hala and Hau went to assist Tapu Fini in battling Buzzwole.[2] 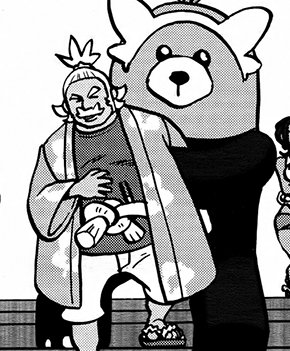 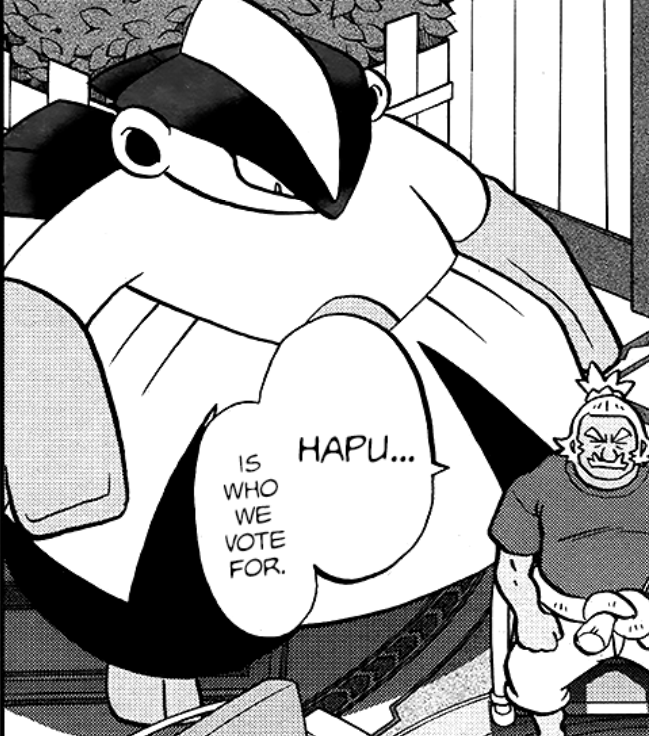 Retrieved from "https://pokemon.fandom.com/wiki/Hala_(Adventures)?oldid=1189559"
Community content is available under CC-BY-SA unless otherwise noted.