First
Hala is a character appearing in the games, Sun and Moon. He is the Island Kahuna of Melemele Island. He is also the grandfather of the player character's rival, Hau.

Hala is a stocky old man, who has white hair tied in a ponytail similar to his grandson Hau, as well as white eyebrows and moustache. He wears a blue shirt under his yellow jacket with flower pattern, a shirt tied in a knot over a red and white fan. He also wears white shorts and white/blue flip-flops. In addition, Hala has squinty eyes.

Hala is a caring grandfather to Hau. He prefers fighting types and respects the player character's power. Hala is a bold and seasoned trainer, though he's fatter than the typical trainer of his type specialty, Hala makes up for it with his go-getting perseverance.

Just as Lusamine unleashes the Ultra Beasts on the world, Hala teams up with Tapu Koko to battle on Melemele Island.

Later, once the Alolan Pokémon League is established, Hala is requested by Kukui to become an Elite Four member, which he accepts.

Later, Hala's grandson, Hau, teams up with Tapu Koko to battle an Ultra Beast on Melemele Island when they are released on the world by Necrozma.

Unlike Pokémon Sun and Moon, Hala does not become an Elite Four member, with Molayne taking his place. 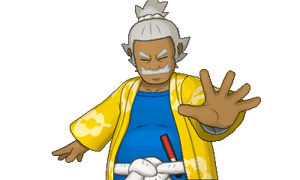 Hala's VS sprite in Sun & Moon