Hakamo-o is a bipedal, reptilian Pokémon with many scaly plates. Most of its body is light gray, but it has dark gray arms and legs. It has angular, red eyes, a rounded, beak-like snout with a small spike on either side of the upper jaw similar to teeth, and two small scales standing up on either side of its head. Down the center of its chest is a line of three slightly raised scales, and there is a matching line of four scales down its back. Several slightly raised gray scales overlap its shoulders. In between its shoulders and on each side of its head is a small, white crest made of feathers. It has three yellow claws on each appendage and a long, tapering tail.

This Pokémon has many scale plates on its body as well. There is a yellow one on its forehead, which is oval with a light yellow, heart-shaped stripe across the middle. Two circular scales cover the front of its neck; both are light yellow with darker edges. The tops of its arms are covered by three overlapping scales. The first two arm scales are gray with yellow trim, but the last scale is red with yellow trim and much larger. At the tip of its tail is a small, circular scale. This last scale has a light yellow portion before ending in a darker yellow.

This Pokémon leaves its family to train on its own. It will keep looking for an opponent to fight, and when it does, it will clang its scales, dance around ferociously, and let out a battle cry as a sign it wants to fight. It does not worry about defense, but looses it scales because of this. It will wear the scales it lost as a sign that it battled a strong opponent, though its scales grow back quickly, and it will always feel proud on showing off its scars to look down any fallen foe. As shown in the anime, Hakamo-o and its evolutionary family are very territorial and will attack any humans that wonder into their home. When Hakamo-o come across one another in the wild, they will brandish their bare arms to boast how many scales they have lost fighting ferociously in battle.

Hakamo-o have heat insulating scales, which can be used for making frying pans for humans. These scales are very good conductors of heat, hence in traditional Alolan smithery, they are molded into primitive pots and pans for cooking.

Aside from their scales, their sharp claws can rip and dismember any careless foe.

Hakamo-o is the evolved form of Jangmo-o as of level 35. It evolves into Kommo-o at level 45.

Hakamo-o is based on lizards, dragons, tribal warriors, and various dinosaurs such as theropods or ankylosaur, the latter of which were dinosaurs who had armored plates around their bodies. It's name also implies it is based on the mo-o, a dragon in Hawaiian mythology.

Hakamo-o comes from Haka (a type of war dance) and mo-o (Hawaiian for "dragon"). 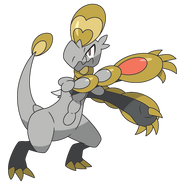 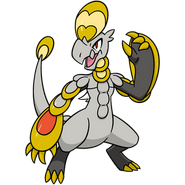 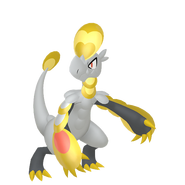 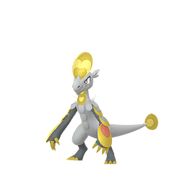