Guzzlord (アクジキング, Akujikingu) is a Dark/Dragon-type Pokémon introduced in Generation VII. It is one of the Ultra Beasts and is code named UB-05 Glutton.

Guzzlord is a black, bipedal creature highlighted by bioluminescent blue and yellow markings. On its round bloated stomach is an enormous mouth filled with sharp teeth, and from it protrudes a pair of tongues, each with a set of jaws and teeth of its own. It has a small triangular head on the top of its body, four glowing blue eyes, a pair of small three-clawed hands and a tail tipped with a mace-like club. Guzzlord has only one weakness: quoting Dia, "Guzzlord has a weak-spot: that second face above its huge mouth."

Guzzlord is a ravenous eater, devouring everything and anything in its proximity. Its known to have devoured whole buildings, even mountains, according to reports. Its two tongues have teeth of their own and are used for grabbing food. Despite its boundless appetite, however, Guzzlord produces no known excreta, presumably converting all it eats into energy.

Guzzlord does not evolve.

Guzzlord first appeared in "SM100: Battling the Beast Within!" where Ash Ketchum and his Pikachu encounter it in an alternate dimension. Guzzlord later appear in "SM140: Z-Move Showdown!", where it reak havoc at Manalo Conference along with its two Shiny Guzzlord allies.

Guzzlord is based on a black hole, as it consumes all and excretes nothing. Its appearance is based on crabs and sharks, as well as medieval armor. It may be also inspired by the Taotie, a mythical creature of Chinese legend that symbolized gluttony and chaos, with a body that was mostly a mouth.

Guzzlord may also be based to some degree on Chattur'gha, an ancient and evil god-like being from the Nintendo-owned survival horror/action-adventure game Eternal Darkness which resembles a crustacean, has multiple mouths, and has power over matter, physical strength, and physical health (which may explain why its highest non-HP stat, and thus the one affected by Beast Boost, is its Attack stat). With the theory that the original seven Ultra Beasts are based on the Seven Deadly Sins, Guzzlord may be based on the sin of gluttony, as it consumes everything and usually leaves nothing but destruction behind, as well as possibly being based on the aforementioned myths.

It may also be based off the creature designs of HP Lovecraft, and also Agrajag, the demonic creature and recurring antagonist from Hitchhiker's Guide to the Galaxy. Its round, horned appearance, ravenous nature, and cosmic origin may also be derived from the Transformers villain Unicron, a planet-sized Transformer that eats other planets.

Guzzlord may be a combination of guzzle (to consume a lot greedily, usually food) and lord. 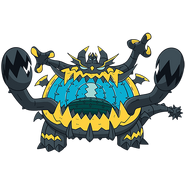