Guzma is a character who appears in Sun and Moon and the minor antagonist of the games. He is the boss of Team Skull.

Guzma is a young man with white hair top with a shaved lower black, dark eyes and black eyebrows. He wears a black jacket with a zigzag pattern on both sides of his jacket, which has the Team Skull logo on the back. He also wears a white shirt, some black pants with two white X's under his knees and pair of white shoes. Guzma also has a purple tattoo of Team Skull on his left arm and a golden watch, while on his right hand are black and white bracelets. He also wears sunglasses with a golden frame (with one of the glasses being bent) and a locket that has the yellow logo of Team Skull.

A dark individual, Guzma wishes to sow fear and chaos among Alola who bears an intimidating look, which has granted him a lot of respect, even among those not of Team Skull. Guzma sometimes behaves erratically when being defeated.

As later revealed, however, he lacks confidence and desperately wants to be taken seriously as a Trainer, something Lusamine took advantage of to trick him into serving as her hidden enforcer. For all of his posturing, he does have a conscience, realizing upon seeing how obsessed Lusamine is with Ultra Beasts and her cold attitude towards the destruction they cause that he has become a danger to the world at large and turns against her.

His English and Japanese name, Guzma, both come from "guzmania", another name for the tufted airplant.

Guzma originally aspired to become a Trial Captain with Professor Kukui. He was even Hala's apprentice to train in battling. While he was a talented trainer in his own right, having won many trophies and awards, he also struggled to in his efforts to be the best, never once having placed first in any tournaments. It is also implied that he suffered domestic abuse from his father and he ran away from home to escape it. He was also rejected as Trial Captain for unknown reasons. After failing to become a Trial Captain, Guzma formed Team Skull with other kids who failed the Trial vowing to destroy the very same traditions that shattered his dreams.

He is first encountered at Malie Garden and mocks Professor Kukui for trying to create the Alolan version of the Pokémon League. He then battles the player character after seeing the Z-Ring. He ends up losing and leaves. He is then encountered at Po Town after a couple of Team Skull Grunts stole a kid's Yungoos. The player character is the only one who offers to got get the Pokémon back in the cursed town. He is at the top of the mansion and has a lot of Buginium Z, collected from the whole Alola. He is defeated yet again and leaves the room, leaving free to grab a Buginium Z as reward. He is later revealed to be working with Lusamine, because she had pointed out how strong he was and he fell for her words of trust. He blocks the entrance to the mansion where Lusamine's secret lab is. After the wormhole is opened, he follows Lusamine into Ultra Space. The rest of the team ask of the player character to rescue their boss. The player character meets him after his encounter with a Nihilego. He states that its the first time he has actually been scared. He is teleported out by Solgaleo or Lunala after the battle with the Ultra Beasts. He realizes how pointless Team Skull really was and disbands it, becoming a normal Trainer.

The player character, after becoming the Champion, is able to find him in his parent's house, where he challenges the player for one last battle. Once defeated he'll give a Dawn Stone as reward, stating it's his lucky charm.

Post battle, the player can find him in the Battle Tree as a potential challenger and partner for recruitment. 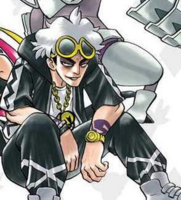 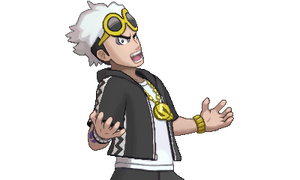 Guzma's VS sprite in Sun & Moon