For the variant appearing in the games, see Gurkinn.

Gurkinn is a character appearing in Pokémon Adventures.

Gurkinn is a nearly bald, old man, who only has a lock of hair on his head. He has large, yellow eyebrows, which slide down to his ears. Gurkinn wears a red undershirt, some grey rolled pants and a sleeve-rolled jacket, the latter having red outlines and a black mark on the left part of his chest, showing a Key Stone with the Mega Evolution mark. Gurkinn wears black shoes with red soles. He also has a left black fingerless glove, where he keeps his Key Stone.

Gurkinn, being a teacher of Mega Evolution, has a good analysis whether the person is honorable enough to become his disciple. To him, Gurkinn wants from such people a righteous heart, to act as they speak and to have a vital heart, though he usually ignores the other traits. He knows a lot of people desire the power of Mega Evolution, hence why he wants his students to keep the information hidden from the public. He values the tradition of succession ceremony. However, being old, Gurkinn is also wise to even sometimes break such ceremonies. Gurkinn also has a granddaughter, from whom he expects to refer as "teacher" rather than grandfather, while being inside the Tower of Mastery, showing his authoritative side. Gurkinn is also selfless, to the point to give out his own Key Stone to the last Mega Evolution Successor.

At the Junior League tournament in Kalos some years prior, Gurkinn worked as the announcer. He watched as X defeated all the trainers and became a champion. Soon, two reporters forced force X and Kanga, but Gurkinn protected the new Champion, X. He told X to treasure the bond he shares with his Pokémon, regardless if some bad adults tried to exploit that. Gurkinn gave X a Mega Ring, as a reminder of what he said.[1][2] Gurkinn was teaching other qualified trainers the secrets of Mega Evolution and had three students while Korrina was out on the mission Gurkinn gave to her. Once Korrina and Lucario (who evolved from Riolu) returned to the Tower of Mastery, Gurkinn approved of all the tasks they completed on their journey and gave Korrina a Key Stone to Mega Evolve Lucario. Gurkinn only pointed out she should refer him as teacher, rather than her grandfather, but was still impressed by Korrina's prowess. Gurkinn and Korrina went to a balcony, where they saw some fireworks. Gurkinn pointed out Korrina must not contradict herself, act according how she is speaking and have a vital spirit. Korrina nervously tried to pull her Key Stone out of her glove, but Gurkinn's students showed how to trigger Mega Evolution, so Korrina tried to do the same.[3] His other students were Diantha[3] and Blue.[4]

Korrina noticed X had a Mega Ring and realized her grandfather, Gurkinn, gave X the Key Stone without a proper successor ceremony.[5]

Gurkinn was at the Tower of Mastery, overhearing some boys, who did not know the history of the place. Gurkinn thought it was actually for the best to keep the info from the public. Suddenly, Korrina arrived to scold him, even wanting Lucario to Mega Evolve and attack Gurkinn to teach him a lesson. Gurkinn stopped Korrina, who was displeased Gurkinn gave X a Mega Ring, since there always has been a successor ceremony for anyone that was to obtain the Key Stone. Gurkinn tried to explain he felt that X needed the Key Stone and radiated with a strange aura, but Korrina continued attacking Gurkinn for steering away from his teachings. Their argument was cut short when Gurkinn was cut by his leg. Korrina rushed off to apprehend the perpetrator, but Gurkinn remained behind. Essentia appeared and questioned him about the Mega Lucario statue. Gurkinn told its size was about 15 meters and knew his enemy was to learn about Mega Evolution he taught to his students and passed on the Key Stones. With that in mind, Essentia started the battle by sending her Phantump to attack the old man.[2]

Gurkinn couldn't move much, due to his leg injury. He found it disrespectful an enemy battles an old man, who couldn't move around much. He also thought Essentia couldn't even use the power of Mega Evolution she wanted to seek badly. He stated a lot of people want to exploit the power of Mega Evolution, so teachers like him exist so they can evaluate people. He stated people like Team Flare do not deserve such power, even if Essentia claimed she did not know about that organization. Gurkinn sent Heracross, which he Mega Evolved. Gurkinn asked about Korrina's Mega Lucario and wanted her to get Lucario down. Korrina did so and Mega Lucario nearly hit Essentia. However, seeing Essentia was too powerful, Gurkinn and Korrina tried to escape, but Essentia's Trevenant blocked the exit. Gurkinn saw they had to abandon the tower. Korrina protested, but was told the knowledge of Mega Evolution would live on, even with the the Tower of Mastery destroyed. Gurkinn and Korrina had their Pokémon attack the statue's chest, which triggered the self-destruct mechanism. Gurkinn also told he gave all the Key Stones he had, with the last one handed to X. Before leaving, Essentia told her name to Gurkinn and his granddaughter. Korrina was crushed, but Gurkinn told her the enemy would attack tower continuously before obtaining the secrets, feeling it was best if they destroyed the tower so early. Gurkinn and Korrina left to hide away, while Gurkinn felt glad the secrets of a special Pokémon were protected.[6]

When Korrina woke up from her dream, a lady warned her about a member of Team Flare, Chalmers, who started attacking Gurkinn, who was ambushed asleep. Korrina tried to help Gurkinn out, but he was pushed away, into the water by some Skrelp, as Chalmers was wanting to kill Gurkinn with his Skrelp. Fortunately, Diantha, the lady in disguise, arrived and had Gardevoir use its psychic powers to stop Skrelp from attacking and lifting Gurkinn out of the water. Gurkinn thanked Diantha and introduced Korrina to the Champion, who was the first to reply on his call for help. Once Chalmers was defeated, Gurkinn asked Diantha did she know what was happening in Kalos. Diantha knew the enemy was after the power of Mega Evolution, but none of them knew the reason behind it. Gurkinn, however, was told the enemy sought two Legendary Pokémon as well and they had to find the one sealed in a cocoon.[3]

As they were taking a break near Shabboneau Castle, Korrina came to Gurkinn, who was polishing their Key Stones, to keep them clean. Korrina asked why didn't Gurkinn make the same gear for holding the Key Stone for each Mega Evolution Successor and was told the wielder of the Key Stone must have a gear that matches their personality, to draw out the maximal potential. Korrina replied the Key Stone was a mysterious item, though Gurkinn believed the whole process and even the Pokémon were mysterious, too. Gurkinn admitted they stayed in here, since he wanted to make a strategy to find the "cocoon" Diantha spoke of. Diantha told Gurkinn about the Carbink and was told there is a certain Pokémon in the cave that was capable of Mega Evolving. The trio came into the steep cave, where they found fainted Carbink, whom Gurkinn knew they were valuable and could be sold out for money. The trio faced a thief, who snatched Diancie and sent some Binacle to attack. Korrina asked about Diancie and was told it was a transformation of Carbink, which lives with Carbink and is much more beautiful than the rest. To counter, the trio sent their Pokémon, including Gurkinn's Heracross, to attack. Per Gurkinn's order, the trio let the thief escape, while their Pokémon Mega Evolved to battle the Binacle. The trio managed to corner the thief on a hilltop. The thief threatened to harm Diancie, who attacked him with Diamond Storm and Moonblast attacks. With the matter settled, Gurkinn, Diantha and Korrina bid the Shabboneau Castle's owner farewell, though Diancie leapt on their Key Stones, as Gurkinn pointed out Diancie could Mega Evolve.[7]

Diantha, Gurkinn and Korrina had to disguise themselves to move through the public unnoticed. They learned about Team Flare's plans about moving the Xerneas tree and went off close to Route 15 to stop the plans.[8]

While speaking to Celosia, Malva recalled Gurkinn, the Mega Evolution Guru, who, along with his granddaughter, fled the Tower of Mastery, which was destroyed.[9]

Gurkinn arrived to the battlefield and had Gengar stop Celosia's Aegislash from attacking X.[10] X was glad Gurkinn came, though Korrina pointed out there was no time for talking. Gurkinn explained he would give Gengar to X, but it does not obey its trainer and wants some attention. He also pointed out Gengar can Mega Evolve, but it is only a matter to bond with the Pokémon. X whispered into Gengar's ear and Gengar immediately started battling, impressing Gurkinn X managed to get Gengar into battle so quickly. X was not glad he cannot Mega Evolve Kanga nor Elec. Gurkinn told him X can only Mega Evolve one Pokémon, not several ones at once. With the battle raging on, Gurkinn asked Korrina to focus on battling Celosia, while he and X tried to figure out Trevenant, who predicted incoming attacks.[11] X managed to Mega Evolve Gengar, nicknamed as Lasma. Gurkinn congratulated him and pointed out Gengar's ability changed from Levitate to Shadow Tag. He also mentioned some Pokémon's types change when Mega Evolve. Once Essentia retreated, X, Tierno and Trevor went to help Korrina out. Gurkinn, Y and Shauna turned to Diantha, who was battling Malva inside a sphere. They tried to break through the sphere, created by Malva's Braixen's Magic Room, but failed and the sphere sank into the ground.[12]

Gurkinn eventually trained the children for future encounters against Team Flare. From the special training, X's Marisso evolved into a Quilladin and X's Salamè evolved into a Charmeleon.[13] As the training went underway, Gurkinn wondered if he could give Y a Mega Ring.[14]

Gurkinn came to the Lost Hotel at Kalos Route 15, where he took his own Key Stone from his glove and made a Mega Ring for Y. Gurkinn approached Y, who took Gurkinn's oath and accepted the Mega Ring. Y felt a bit sad, since she took Gurkinn's only Key Stone, but Gurkinn explained he had to pass the legacy to the young ones, since he is quite old, feeling Y would benefit more by having the Key Stone herself.[8]

Gurkinn visited Blue, who greeted Gurkinn as "master", which made Ramos curious why Blue referred Gurkinn like that. Gurkinn explained to Ramos Blue was one of his old Mega Evolution disciples, and while Blue did have the traits to become the Mega Evolution successor, Gurkinn joked he ignored his other, less desirable traits.[4]

X, who saw Emma was actually Essentia, stated she couldn't betray her friends; he remembered how Gurkinn lent him the power and helped him to continue on.[15]

Steven recalled having come to Gurkinn at Tower of Mastery, where Steven obtained the Key Stones and learned about Mega Evolution.[16] 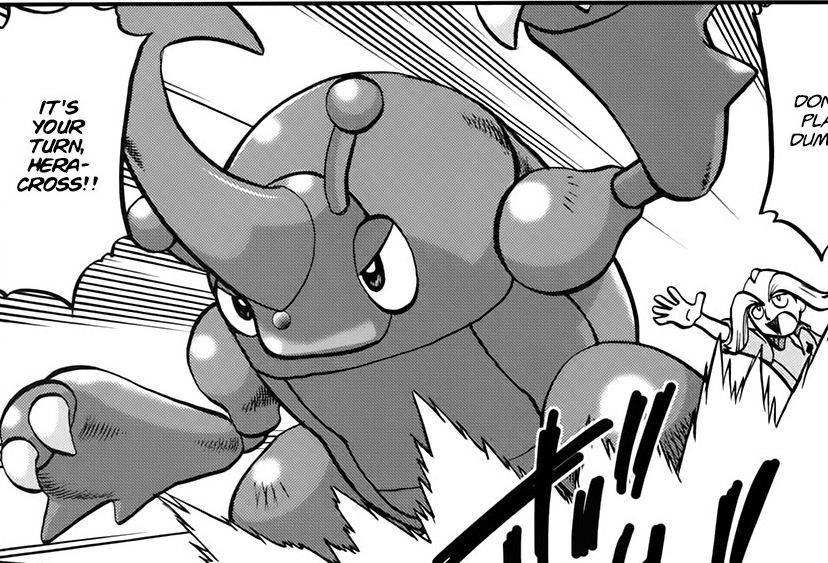 Retrieved from "https://pokemon.fandom.com/wiki/Gurkinn_(Adventures)?oldid=1040842"
Community content is available under CC-BY-SA unless otherwise noted.