Gurkinn is a character appearing in Pokémon X and Y.

Gurkinn is a nearly bald, old man, who only has a lock of hair on his head. He has large, yellow eyebrows, which slide down to his ears. Gurkinn wears a red undershirt, some gray rolled pants and a sleeve-rolled jacket, the latter having red outlines and a black mark on the left part of his chest, showing a Key Stone with the Mega Evolution mark. Gurkinn wears black shoes with red soles. He also has a left black fingerless glove, where he keeps his Key Stone.

He, being a teacher of Mega Evolution, has a good analysis whether the person is honorable enough to become his disciple. To him, Gurkinn wants from such people a righteous heart, to act as they speak and to have a vital heart, though he usually ignores the other traits. He knows a lot of people desire the power of Mega Evolution, hence why he wants his students to keep the information hidden from the public. He values the tradition of succession ceremony. However, being old, Gurkinn is also wise to even sometimes break such ceremonies. Gurkinn also has a granddaughter, from whom he expects to refer as "teacher" rather than grandfather, while being inside the Tower of Mastery, showing his authoritative side. Gurkinn is also selfless, to the point to give out his own Key Stone to the last Mega Evolution Successor.

His Japanese name, Konkonburu, comes from concombre, French for cucumber.

Both of these names relate to his granddaughter Korrina, who's Japanese name originates from cornichon, the French name for gherkin.

Gurkinn is the head of the Tower of Mastery, renowned as the "Mega Evolution Guru" because he knows more about Mega Evolution than Professor Sycamore. He is also Korrina's grandfather and a descendant of the first Trainer who Mega Evolves Lucario. 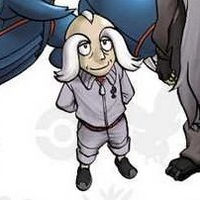