Gumshoos shares many similarities to its previous evolution. Its main fur is brown, but the top and underside are yellow in color. Gumshoos has three, black toes on either paw. Unlike its pre-evolution, Gumshoos is now in the bipedal position, and is much larger in general. It has large white eyes with horizontally-slitted pupils and it has spikes on its fur that resembles a detective's trench coat collar.

Gumshoos deploy the opposite strategy from Yungoos when hunting. Instead of prowling around for its prey, Gumshoos stakes out its prey's usual routes and waits for it come by. It's known to be patient and persistent.

Being a normal-type Pokémon, it possesses no special abilities. However, it tends to bite. Unlike its previous evolution, it is very patient and can stay in the same area for a long time.

Gumshoos is based on a Javan mongoose, a mongoose species introduced to Hawaii to control rats from eating sugar cane crops, and a detective.

Gumshoos comes from gumshoe (another name for a detective), and mongoose. 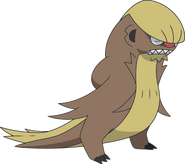 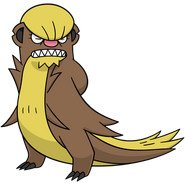 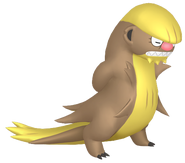 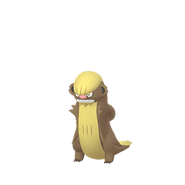