Grubbin (アゴジムシ, Agojimushi) is a Bug-type Pokémon of Alola region. It evolves into Charjabug at level 20.

Grubbin is a small larva-like Pokémon with large, orange-tipped pincers. Mostly white, it has 2 yellow dots on the side of its body. Its head is primarily brown, with a yellow-rimmed orange helmet-like structure and a sideways, jagged mouth.

Grubbin loves electricity and lives around power plants.In order to stay safe from avian Pokémon, Grubbin often make their homes near or in the habitats of Electric-type Pokémon, as Flying-types are weak to them and usually avoid places where they congregate.

Grubbin have strong mandibles that they use for almost everything. They use them to burrow underground, for instance, where they spend the majority of their time. Grubbin also use their jaws to scrape away at the bark of trees and feed on exposed sap.They will use their mandibles to dig their nests into the soil.

Though very slow on the ground, Grubbin can escape from peril by shooting sticky threads to attach themselves to branches or wires and then swing away like tiny acrobats. Once they are safely away from danger, they can simply cut the strands with their sharp mandibles to free themselves. They can also bind attackers with these threads to slow them down and buy time to flee. Smaller avian Pokémon like Rookidee are often wary of tangling with Grubbin because of their powerful mandibles.

Grubbin is capable of spewing a sticky web from its jaws, which it can then use to swing around from tree branches.

Grubbin evolves into Charjabug at level 20 and then into Vikavolt when leveled up at Vast Poni Canyon.

Grubbin is based on beetle larva, as they usually have an orange head and a white body before they gain a shell. Its white coloration and jaw also make it resemble a two pronged electrical plug, foreshadowing its evolution into a part Electric-type Pokémon.

Grubbin comes from grub and grubbing (to dig through hard dirt).

Its Japanese name, Agojimushi, comes from ago (jaw), mushi (bug) and jimushi (grub). 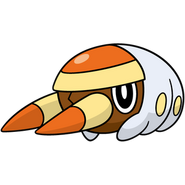