Grovyle is a light green, bipedal Pokémon with plant and reptilian features. Its head has a long snout with small nostrils, it also has yellow eyes. A long, mane-like leaf extends from the back of its head. It has a red/orange stomach extending from its jaw to its rear. Grovyle has two arms, each with a small extension on the elbow-area and two claws. Sets of three leaves hang from them. Its tail consists of two leaves and its legs are large with two claws as well. There is a green line on the middle of its stomach.

Grovyle appears in the Pokémon Mystery Dungeon games (Explorers of Time, Darkness, and Sky) and has a huge role in them. 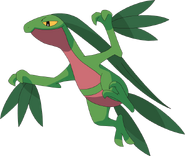 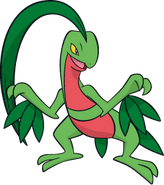 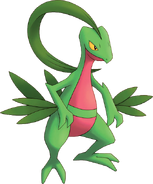 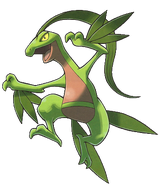 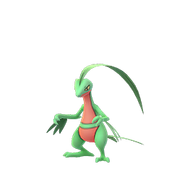