Groudon (グラードン, Guraadon) isFire a Ground-type Legendary Pokémon introduced in Generation III. Groudon is the Version Mascot for Pokémon Ruby and Pokémon Omega Ruby. It is a Primal Pokémon as well.

It is a member of the Weather Trio along with Kyogre and Rayquaza.

Groudon is an immensely powerful Pokémon, having the ability to summon intense droughts and cause volcanic eruptions. The droughts it can cause allow it to evaporate water, while the volcanic eruptions it can summon enable it to create land. It sleeps underground in large magma chambers. If it encounters its rival, Kyogre, they will engage in a cataclysmic battle. Groudon is the only known Pokémon capable of learning the move Precipice Blades.

As Primal Groudon, it becomes larger and has a deep, crimson body. The spikes on both sides of its body, tail, jagged teeth and underbelly are black, with the spikes on the tail becoming longer and facing diagonally, instead of being straight. The four blades at the end of its tail are now split. Its sharp claws on its hands and its claws on its feet remain pure white. Both of Primal Groudon's hands bear an Omega symbol on them. The markings, some of which extend to its underbelly on its body and the Omega symbols it bears, glow bright yellow, as if lava is flowing inside of it, including the inside of its mouth and around its eyes, which changes to an orange-red color. In the anime, Primal Groudon is said to create new land with every step it takes.

Groudon does not evolve. However, since Omega Ruby and Alpha Sapphire, it is capable of undergoing Primal Reversion in battle if it holds the Red Orb.

In Pokémon Mystery Dungeon: Red Rescue Team/Blue Rescue Team, Groudon appears as one of the main villains. After the hero, the partner, and the Alakazam's Team discovered the truth about Ninetales' Legend, he causes an earthquake and, later in the game, the hero and the partner have to go to the deep of Magma Cavern to save Alakazam's Team, defeating Groudon. After his defeat, he can be recruitable to the Rescue Team. He has a minor appearance in the next game, when he appears as an illusion created by Uxie. It is one of the heaviest Pokémon, as can be observed in the RSE Pokédex.

In Super Smash Bros. Brawl, it makes an appearance as an assist trophy and like the other ancient Pokémon from Emerald/Sapphire/Ruby, it makes a non-playable appearance. Groudon will on the screen as a very large Pokémon and will glow a red color making it a fire attacker. It will be completely invincible and will launch any fighter away from it except the one who uses it, and because of this, it can be used as somewhat of a shield. Groudon will not attack, but will turn around and roar.

In Pokémon Rumble Blast, Groudon can be encountered if the launch pad leading to the boss fight is shining, but only if the main story has been finished. There is roughly a 5% chance of the "!" launch pad shining.

Groudon had a fight with Kyogre at the place where Kyogre slept. Groudon appeared in the Pokémon Anime in Gaining Groudon!, and The Scuffle Of Legends!, debuting with Kyogre as well. Team Magma and Team Aqua were competing to gain both legendaries. Team Aqua, as it turned out, tricked Magma leader Maxie by taking Kyogre even after they had Groudon. Ash's Pikachu then shocked Groudon's cargo container and released it to fight against a rampaging Kyogre.

A false one also appeared in the 6th Pokémon Movie, Jirachi: Wish Maker which a Team Magma scientist tried to create, but the experiment failed ending in a massive Groudon-like monster.

Groudon may be modeled after the Earth's land and volcanoes and may be based on the Hebrew legends of Behemoth, the unconquerable primal master of the land. Its counterparts were Leviathan and Ziz. Just as Groudon is in conflict with Kyogre, it was said that at the end of time, Behemoth and Leviathan would start a battle that would kill them both.

However, the Behemoth is usually depicted as a warthog/hippopotamus-like creature; in the same way, Kyogre is not based on traditional depictions of the Leviathan. Instead, Groudon resembles a therapod dinosaur in appearance, with spikes resembling various species of Ankylosauria. This may be due to the fact that Biblical Young-Earth-Creationists have attempted to read the features of various dinosaurs into the Bible's description of Behemoth (although they usually pick a sauropod rather than a theropod or Tyrannosaurid), based on the inaccurate notion that a late-surviving non-avian dinosaur would somehow discredit Darwinian Evolution and/or the idea that the Earth is millions of years old. Groudon also seems to take inspiration from land and fire gods.

Groudon may be a combination of ground and don (Spanish for lord). Don also means tooth in Ancient Greek and is commonly used in dinosaur names, which Groudon somewhat resembles. It may also involve 土 do (ground) or ドン don (onomatopoeia for a very loud crashing noise). 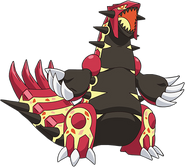 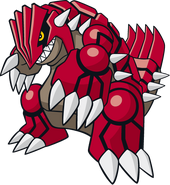 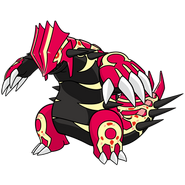 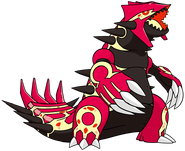 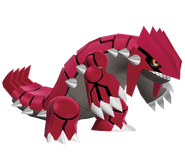 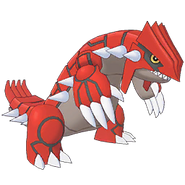 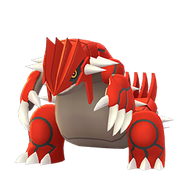 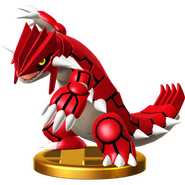 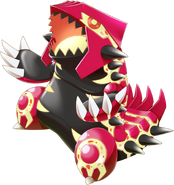