Grimmsnarl (オーロンゲ, Ooronge) is a Dark/Fairy-type Pokémon introduced in Generation VIII. It evolves from Morgrem and is the final form of Impidimp. It has a Gigantamax form known as Gigantamax Grimmsnarl.

Grimmsnarl is a large, muscular, humanoid Pokémon with light green ears, feet and stomach sides. It has dark purple hair on its head and partially its shoulders and legs. A red gem rests on its chest. In its mouth comes with two large fangs.

Its Gigantamax form is covered with hair, save for its head and gem, and becomes much slimmer and taller.

Grimmsnarl are extremely strong, able to overwhelm even Machamp by using their hair to boost their muscle power. The hair also doubles as tentacles to ensnare foes with.Grimmsnarl are said to make their homes deep within dark woodlands, venturing out in the dead of night to visit unlucky homes. They are thought to seek out the houses of those who are discontent with their lots in life and feast upon their despair and frustration.

Though Grimmsnarl return to their woodlands before sunrise, they are said to lash out viciously at those who sight them while feeding. Thus, children should not sneak out of the house late at night, unless they wish to risk attracting the ire of a feeding Grimmsnarl. It is said that after a Grimmsnarl visits a home, it will leave behind a telltale scattering of black hair. This is a sign for the home's inhabitant to make a change in their life to stop the Grimmsnarl from coming again.

Grimmsnarl is based on trolls and ogres. It may also take inspiration from the Oni, a Japanese yōkai that is often depicted as a demon, sometimes sporting large amounts of hair or wearing clothing made of furry animal hide. It may take inspiration from the Grendel, a monster in "Beowulf" who was known for its pure darkness and extreme strength. Judging by its signature move False Surrender and green skin, it might be based on the Green Knight from "Sir Gawain and the Green Knight".

Grimmsnarl comes from the words "grim", "grimm" (from the Brothers Grimm), "grimoire" (a type of spell book, hence the Fairy type), "Grímnismál" (a mythical poem), and "snarl". 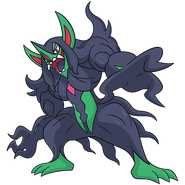 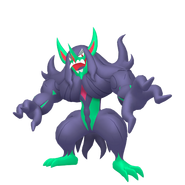 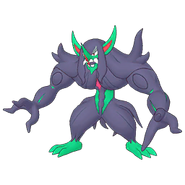 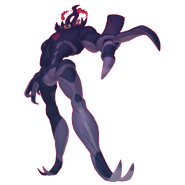