Greedent is a small Pokémon that resembles an obese red squirrel. It has reddish-tan fur with darker red-brown fur on its bloated belly, ear tips, underside, and the lower half of its face. It has black eyes, light tan markings around its eyes, an orange nose, orange ear insides, a buck tooth, and fluffy cheeks with orange "freckles" on them. It also has stubby limbs and a huge, fluffy tail that it uses to store berries.

True to their name, Greedent are extremely greedy and gluttonous (hence their plump physique). They store so many berries in their tails that they never notice when they lose them. They're also slow-witted and have a habit of attacking people that shake berry trees too much.

Greedent have powerful teeth which can crack open even the hardest of nuts.

Greedent made its debut in the anime when it evolved from Goh's Skwovet.

Greedent is based on a fat Eurasian red squirrel. As Galar is based on the UK, Greedent may also be based on Conker, an ill-tempered, greedy red squirrel character created by British game developer Rare (now part of Microsoft), which had worked together with Nintendo on several games in the past. 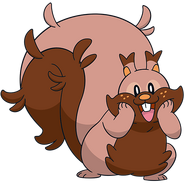 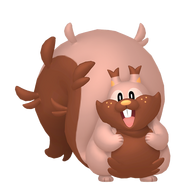 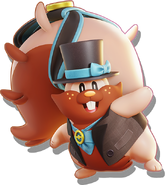 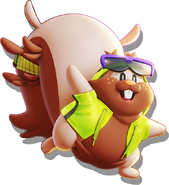 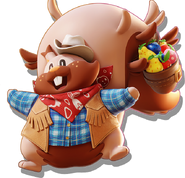 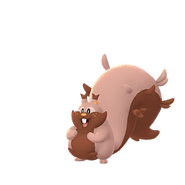