Grapploct is a blue octopus-like Pokémon. Its face has a design that is similar to masked wrestler that is yellow in color, with 2 light blue eyes. Its tentacles are black on the underside and have yellow suckers on them. This Pokémon has 4 tentacles as arms, 1 wrapped around its belly as a belt, and 3 as feet. Its head has small jet at the side.

Grapploct apparently enjoy challenging various Pokémon in feats of strength, usually against terrestrial (land living) Pokémon. They returns to the sea after the battle is over.

Grapploct and Golisopod living in Galar appear to be each other's prey, with the winner eating the loser of their brawls.

According to Pokémon Sword's Pokédex, its body is made of pure muscle, which makes its grip very hard.

Grapploct consume Golisopod that have lost against them during a brawl.

It evolves from Clobbopus when levelled up knowing Taunt.

Bea's Grapploct debuted in PJ034. It made quick work of Ash's Riolu, handing Ash his first World Coronation Series loss and caused him to fall into a slump.

Grapploct appears to be based on an octopus and a luchador or boxer. Its species name also indicates it may be based on the fighting style of jujitsu. Concerning the cross-examinations of species, while Octillery emphasizes on an octopus's ability to fire ink, Grapploct appears to focus on how an octopus grabs its prey or predators with their tentacles and are able to snare themselves around prey and foes with their elasticity. Its Fighting type connection may have also been made due to octopuses ability to "punch" prey with their tentacles during hunts, usually as a form of stunning small prey such as fish. It may also reference Octopus Wrestling, a practice in which a diver wrestles an octopus and tries to bring it to the surface.

Grapploct comes from the words "grapple", "locked", and "octopus". 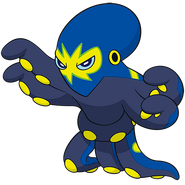 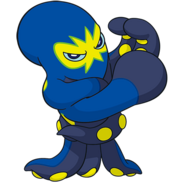 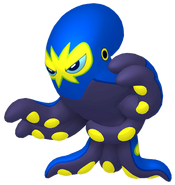