Pokémon Wiki
Register
Don't have an account?
Sign In
Advertisement
in: Male characters, Pokémon the Series: XY and XYZ characters

For the variant appearing in the games, see Grant.

Grant is a character appearing in Pokémon the Series: XY and XYZ, who is the Gym Leader of Cyllage City in the Kalos region.

This section, or a part of it, has been transcluded from Grant; any changes involving it should be made there instead. /

Grant has dark skin, black hair and greyish eyes. He wears three stones in his hair, colored yellow, red and blue. He wears a simple black shirt, grey pants and black shoes and carries the climbing equipment on his neck and around his hips.

In the Battle Chateau, Grant wears a grey suit, with a black undershirt and brown shoes. Also, he wears a formal, decorated cloak for the battles, from a red one (symbolizing a Duke) to a purple cloak (being promoted to a Grand Duke).

Grant is a calm man, who has a passion for climbing, whether walls or giant rocks. Grant believes one can do his best to overcome walls (aka obstacles) is to look up. He even has a close friendship with the Santalune City Gym Leader, Viola.

The name Grant comes from "granite" (a type of rock) and/or "garnet" (a red gemstone) as well as "pomegranite".

His Japanese name, Zakuro, could come from 石榴石 (zakuroishi, garnet) and, following the plant-based naming of most characters, could also include 石榴 (zakuro, pomegranate). Both words also contain the characters 石, which means stone, referring to his specialization in Rock-type Pokémon.

The heroes encountered Grant in the Battle Chateau, climbing windows. As everyone went to see the battles, Viola visited Grant, who fell down from the windows, finding the windows irresistible to climb on. When Ash had his match with Chester, Grant saw and commented how powerful Ash is, intriguing him. After the match, Grant places a white glove on Viola's shoulder, challenging her to a battle. Grant sent out Onix, while Viola sent out Surskit to battle. Viola attempted to have her Surskit use Ice Beam to freeze Onix and confuse it, but Onix used Rock Tomb, stopping Surskit from moving and using Flash Cannon to defeat it. The heroes were shocked and were told Grant is a Gym Leader from Cyllage City. Grant proposed Ash to meet him in Cyllage City for a battle.[1]

After preparing himself, the heroes came to Cyllage City and went up to the Gym, where Grant was awaiting them. While Serena, Bonnie and Clemont took the elevator, Ash took onto Grant's challenge and climbed up the rocks. Grant asked what Ash was thinking about and Ash replied he was only looking up to climb the wall. Grant saw Ash understood that one has to find means to overcome walls - obstacles. Grant sent Onix and Ash sent Froakie to battle. Onix attempted to seal Froakie with Rock Tomb, but Froakie used Double Team and started climbing the rocks instead, defeating Onix with Water Pulse. Grant was impressed and sent Tyrunt, who dodged Froakie's Water Pulse and defeated it with Draco Meteor. Ash sent Fletchling to attack Tyrunt and managed to hit it with Steel Wing before being defeated by Dragon Tail. Ash, as his final Pokémon, sent Pikachu. Pikachu used Iron Tail on Tyrunt, who used Draco Meteor. Pikachu started climbing the chunks of rocks and used Iron Tail to deflect Rock Tomb into Tyrunt's mouth and defeat it with Thunderbolt. Grant was surprised, but congratulated Ash and gave him the Cliff Badge. As Serena proposed going to Shalour City, Grant told Ash he would have a good battle there.[2]

Grant was seen watching Lysandre's broadcast from Lumiose City where he revealed that he was the leader of Team Flare.[4]

Ash remembered Grant and his Tyrunt fighting theGiant Rock with the rest when he was reflecting back on his journey.[7] 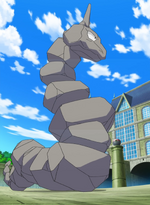