Gourgeist is a Ghost-type Pokémon that resembles a gourd and a jack-o-lantern fused. The top half of its body is tan colored, and long and slender. It has a small face with ovular yellow eyes and a grinning mouth. Atop its head it appears to have long tufty orange hair-like appendages that also function as its hands with three claw-like digits. A lock of hair curls over one side of its face and down its back, and it has a curled stem-like tuft sticking upright at the top of its head. The bottom half of Gourgeist's body is round and deep brown in color; its abdomen resembles a pumpkin carved into a smiling jack-o-lantern, with a sinister yellow light glowing from within. It has two short stubby feet.

Gourgeist come in many sizes, ranging from small to super-size. Its speed and attack power vary depending on its size. The larger it is, the slower it is, but its attack power is higher.

Gourgeist are mischievous and sometimes malevolent Pokémon. They wander town streets on moonless nights, singing in an eerie voice to frighten people. When hunting, it entangles its prey with its hairlike arms and seems to enjoy the suffering of its victim.

It is said that the ghastly noises emanating from Gourgeist's body are the cries of souls suffering in the afterlife.

Gourgeist evolves from Pumpkaboo during a trade. 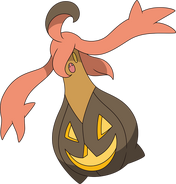 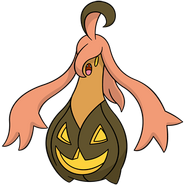 Add a photo to this gallery
← Pumpkaboo | Gourgeist | Bergmite →
Retrieved from "https://pokemon.fandom.com/wiki/Gourgeist?oldid=1190424"
Community content is available under CC-BY-SA unless otherwise noted.