Gossifleur is a small, plantlike Pokémon with a large, yellow flower on its head. This flower covers most of its cream-colored head, which has a green stripe down its forehead and two yellow eyes with black sclerae. It has red, hair-like growths surrounding the back of its head and a green stem-like body.

By getting blown in the wind, Gossifleur can travel for long distance in order to land in areas with clean water and air. They can control their directions by twisting their bodies.

Their pollen has a healing effect that works on healing both Pokémon and humans. The ancient people from the Galar region used to give a tea made from this pollen, which was a common folk medicine remedy, for children when they fell ill.

Gossifleur may be based on a blooming gossypium plant, which are usually yellow in color upon blooming, or a fleur-de-lis. Its body shape is also similar to a pepper or herb. Its ability to learn moves such as Sing and Hyper Voice may be based on the various songs from the UK that have a main focus on gossypium flowers.

Gossifleur comes from gossypium (the plant genus cotton is found in), gossamer (something light and flimsy), and fleur (French for flower). 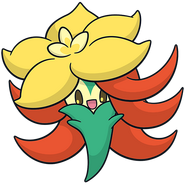 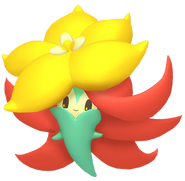