For the variant appearing in the games, see Gorm.

Letting Go
Gorm is a character in Pokémon Adventures.

Gorm had a bald head and gray a mustache and beard. He was dressed in a long blue robe with a Team Plasma insignia and a matching tall cap.

Gorm is one of the Seven Sages that was loyal to Ghetsis, scoffing at people for owning Pokémon. After Team Plasma went into hiding, due to their failed operations at the Pokémon League, Gorm decided to ally himself with Iris, Alder and Benga, to share his knowledge, having become a renegade to the organization.

Gorm was one of the Sages that stood by Ghetsis and claimed the Pokémon were enslaved by humans. To free the Pokémon from humans, Ghetsis sent Gorm to find more information about the Legendary Pokémon, Reshiram and Zekrom.[1]

In a castle, Gorm and the rest of the sages watched as Ghetsis was crowning N, declaring him as the king of Team Plasma, and announce their mission to liberate Pokémon.[2]

The Seven Sages started to rise in power in Unova region. The Interpol took note of their shady activites, and sent Looker from Sinnoh to deal with the situation.[3]

Gorm and the rest of the sages listened to the Shadow Triad's report on N. Ghetsis mused that N was trying to solve an unsolvable formula.[4]

Gorm's Team Plasma Grunts stole a Dragon Fossil from Nacrene Museum and took it to the Pinwheel Forest. Black tracked down the grunts to a clearing, where Gorm appeared. Gorm wondered how Black knew where they were located, to which Black answered that the skeleton was too much for the eastern gates, and they only could go to the west. The sage was impressed by Black's skill on finding their location and saw his potential. He noted it was like the grunts said, and stated it was best that Black was disposed of. He commanded the skeleton to attack the boy. Black was able to find out that Cofagrigus was controlling the Fossil and he defeated it with the help of Burgh's Whirlipede. Gorm quoted that when the hero would rise to the world, the Pokémon would stand by their side. Gorm told his grunts this was not the Dragon type Pokémon they were looking for, and needed to find a different one, then retreated with his grunts.[5]

With the recent incidents of Team Plasma, Black swore to defeat the whole organization, as they were threatening the Pokémon League's opening in question.[6] The Seven Sages, as well as Anthea and Concordia, watched as N struggled to befriend Zekrom. The Seven Sages were concerned, as Zekrom inflicted pain on their king, but Ghetsis reminded N had to do this on his own, in order to be recognized as a hero. The other sages were sad, thinking ordinary trainers would capture Zekrom and think of it as their servant, and was why they thought of their goal to liberate Pokémon as noble.[7]

Rood, Ryoku, Gorm, Bronius and Giallo were below the Pokémon League, making preparations when Brycen confronted them. The latter had Cryogonal emit the ice chain, but the Plasma Sages held Hawes, thus preventing Brycen from attacking. Once Brycen was disposed of, the Plasma Sages gathered with Ghetsis when N's Castle emerged from the ground. They were surprised, however, when seven trainers - Logan, Andy, Chris, Trish, Shoku, Jeremy and Geoff - arrived to confront them.[8] As Reshiram confronted Zekrom, the spectators cheered on, wondering which dragon would win. The Seven Sages were disappointed in these people, viewing the confrontation as a mere battle. To prevent the trainers from rescuing the Gym Leaders, the sages sent their Pokémon to battle them.[9]

The Team Plasma sages were in shock as to how the trainers even reached this place, who exclaimed it was their ideal to live together with their Pokémon, and sharing their dreams with them. The trainers successfully released the Gym Leaders, shocking the sages, as mere commoners have outsmarted them. In the middle of the battle, the sages disappeared from the field.[10] Ever since he was assigned to collect information about the dragons, Gorm visited many places collected artifacts and scripts. He learned that the dragon in question was Kyurem, whose birthplace was the Giant Chasm. At some point, he gave the relics and the information to Drayden.[11]

Gorm later joined Iris and Alder in training. When N arrived to speak with Alder, the latter confessed that there was a time he believed Team Plasma's ideals were virtuous, which shocked Gorm, due to a Pokémon that fell ill, which made him blame himself.[12] Since the disastrous end of the Pokémon League, Gorm, Alder, Benga, N and Iris were training at Whitehollow Forest.[11]

When speaking to Blake, Leo remembered the Seven Sages that caused trouble during the Unova Pokémon League.[13] Zinzolin told Colress how none of the Seven Sages knew nothing of Kyurem, which was why he shared the info about Kyurem with Team Plasma.[14] Whitley decided to give her necklace that contained a chip that could stop Colress' machine to either Gorm or Rood. Finding out Whitley was the Team Plasma grunt he has been searching for, Blake explained one of his missions was to capture the Team Plasma sages, including Gorm.[15]

Iris went with Alder and Team Plasma sage, Gorm, through the White Forest. Their Pokémon crushed through a path, which made Iris pleased that the gramps was here to show them the path, else she would've been lost at the White Treehollow. Alder warned her that her Champion dress was getting dirty, and asked her which gramps did she mean. Iris applauded Gorm and his Cofagrigus, to which Alder became sad that Iris had no compliment about him, but Iris stated it all depended what would Alder do next. Thus, Alder resolved himself as the Champion to fix the mistakes that have been made at the Pokémon League two years ago, and Iris saw that's Alder that she knew.[16]

Gorm went to the Giant Chasm, where he was nearly attacked by Black and Blake. The two were arguing, as Blake's handcuff hit Black's Brav, who went to attack Gorm. The two were stopped by White, who shouted at them to stop, as Gorm was their ally, alongside Rood. With Iris' arrival, Gorm explained he was gathering information, and sided with Drayden and the rest to provide them with necessary information. Suddenly, the group was ambushed by Colress. The latter looked at Gorm, branding him as a traitor to Team Plasma, and wondered if he knew about Kyurem. Gorm confirmed this, remarking the Giant Chasm was its birthplace. Colress attempted to have Black Kyurem electrocute and freeze the group, but Kyurem suddenly stopped.[11]

More alarming to the group, however, was that the Plasma Frigate was reactivated and flew in mid-air. Gorm joined Rood, and the two stood watch over the Poké Balls that fell out of the Plasma Frigate. Rood asked Gorm what he thought of the situation, to which Gorm believed that the "Heroes of Truth and Ideals" were not enemies anymore. Furthermore, Gorm believed that Reshiram, Zekrom and Kyurem didn't care whether they would fuse or remain diffused. Rood asked about Kyurem, and Gorm believed it was not free as long as Colress remained active.[17] 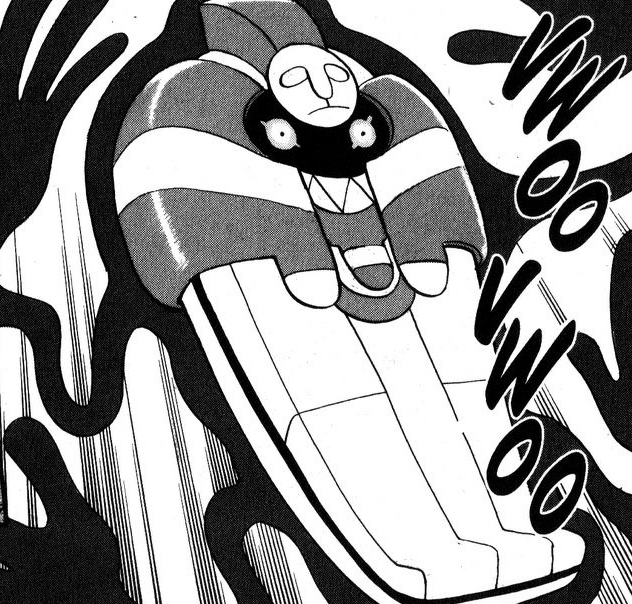 Retrieved from "https://pokemon.fandom.com/wiki/Gorm_(Adventures)?oldid=1327651"
Community content is available under CC-BY-SA unless otherwise noted.