Goomy is a small gooey slug-like Pokémon. It is known as the weakest Dragon-type; its body is very sensitive, covered in a slimy membrane, so it must live in damp, shady places to avoid drying out. Its body is purple in color, the top half being a lighter shade than the underside. Goomy has two feeler-like horns atop its head, tiny black eyes, and a wide mouth with a green spot on either cheek.

Goomy are timid creatures that stay in damp areas due to dehydration risk. They mostly feeds on leaves.

Despite being described as the weakest Dragon-type Pokémon, Goomy's slimy body allows them to endure punches and kicks, which slide off harmlessly, lowering the speed of any foe who makes contact with it when attacking. They must always be hydrated or else they would die of suffocation. They can use their antennae to detect nearby enemies and therefore avoid conflict..

Goomy evolves into Sliggoo at level 40, its final evolution form is Goodra at level 50 while raining outside the battlefield (using moves or abilities to cause rain in a battle cannot make it evolve). In Generation VII and Legends:Arceus, Fog will also work.

Ash Ketchum caught a Goomy as his fourth Pokémon from the Kalos Region. It later evolved into Sliggoo in An Oasis of Hope. It evolved again into Goodra in Good Friends, Great Training!.

Goomy may be based on slugs, limpets or slime monsters. Its Dragon type may come from the blue sea dragon, also known as Glaucus atlanticus, a species of sea slug. Its design may also reference the pop culture depiction of a "living slime" (much like Grimer and Muk). It also resembles the extinct Wiwaxia, a species of soft bodied animals.

Goomy comes from goo and slimy or gummy. 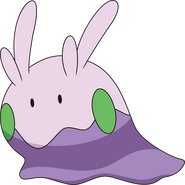 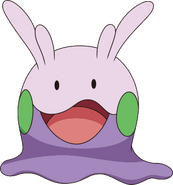 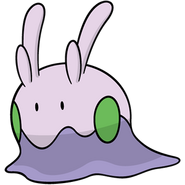 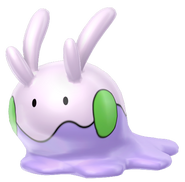 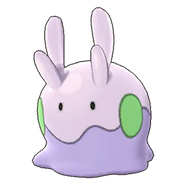 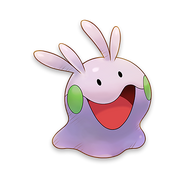 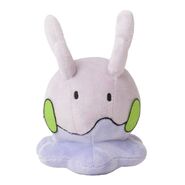