It has a Steel/Dragon Hisuian form introduced in Generation VIII.

Goodra is a bipedal dragon Pokémon with snail-like traits. It has a pudgy light purple body with a round dark purple underbelly. It has vivid green eyes and two green spots on either cheek. Its thick green-spotted tail curls inward, resembling a snail's shell. Goodra has a pair of large retractable horns atop its head. Greenish slime drips from its arms and chin.

Hisuian Goodra's tail has developed into the shape of a snail's shell, where it can usually curl up inside. It has grey spots and drip instead of the normal green.

Goodra are cheerful and affectionate Pokémon. Because of this, Goodra are often teased. However, they will strike at their tormentors with their retractable horns and powerful tails. They will often enthusiastically hug their beloved trainer, leaving them covered in goo. But this also implies that they don't like being left alone and will cry easily if their Trainers do so.

Their sociability is in some ways completely reverses; they constantly need companionship rather than spending most of their time alone. In fact, Hisuian Goodra loathe solitude and are clingy to the degree of fuming and running riot when any of their loved ones try leaving them even for a short period. In stressful situations, Hisuian Goodra will withdraw entirely into their shells, sometimes rocking back and forth repeatedly. They will stick their feelers out of their shell to probe the surrounding area in order to gauge the situation, and only emerge after the situation calms. Only trusted individuals can draw them out of their shells, literally.

Goodra is able to throw very powerful punches equivalent of the force of a hundred pro boxers, and attack with its retractable horns. Its slimy coating, in combination with a layer of fat, causes attacks to slide off.

Hisuian Goodra can also freely control the hardness of their shells.

Goodra evolves from Sliggoo at level 50 when it is raining outside of the battle (using moves or abilities to cause rain in a battle cannot make it evolve) and is the final evolution form of Goomy.

Goodra's design was most likely based on slugs, snails, slime monsters, and Lou Carcolh, a creature in French folklore (Kalos is based on Paris, France) described as a slimy mollusk-like serpent that lives in caves. Additionally, knights in western European medieval bestiaries were depicted as fighting snails instead of dragons, possibly being the origin of its Dragon type, which may also come from the blue sea dragon, also known as the Glaucus atlanticus, a species of sea slug.

Hisuian Goodra appears to be based on snails and has closer ties with the Lou Carcolh in appearance of it's shell and retractable horns/eyes (possibly the Hokkaido grape snail, as Hisui/Sinnoh is based on Hokkaido). It may also be particularly based on the scaly-foot snail, a gastropod whose shell contains traces of iron sulfides. Its excessive clinginess on its loved ones and subsequent wrath when its beloved caretaker leaves might be based on Yandere, a type of personality that refers to people such as girls, and women who are violently and dangerously possessive to the pathological extreme to the degree of committing crimes.

Both its Kalosian and Hisuian forms may be based on the Shussebora, a youkai that lives for thousands of years as a Triton snail before transforming into a dragon once it has migrated from the mountains to the sea.

Goodra comes from "goo" and "dragon" or "hydra". 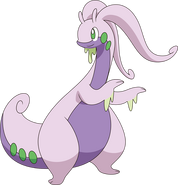 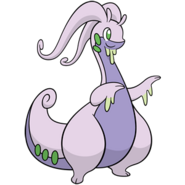 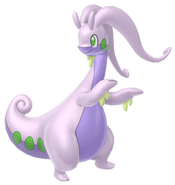 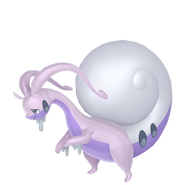