Golurk is an enormous bipedal golem-like automaton with ethereal ghostly powers. Its bulky, heavily armored body appears to be composed of a teal-bluish rocky material; it also appears to be wearing knight-like armor. It has a small head with a spike-like formation at the tip and two yellow eyes (one of which is L-shaped). Its relatively small head is attached to a great round torso. It has a large glowing fissure across its chest, which is stitched closed by a brown band. It has a cylindrical tasset-like formation just beneath its torso, and thick, heavy legs with brown bands encircling its ankles just above its massive feet. Its arms are long, thick and powerfully-built; its shoulders are round with spines protruding from either side, and it has massive five-fingered hands with brown bands encircling its wrists. It has diamond shaped features with glowing yellow swirls on the front of its hands, and identical swirled patterns on its shoulders.

During time's past, people have created Golurk to help with manual labor such as crop harvests. Golurk will always be loyal to its master willingly.

Golurk is extremely powerful; it is in fact so powerful that it must have a seal on its chest to keep its internal energy from leaking out, causing it to lose control. This sudden surge in strength has been known to reduce an entire town into rubble.

Golurk are known as ancient protectors of people and Pokémon. It can Fly, using rocket-like propulsion, to move at Mach speeds. Golurk is powered by a mystical energy source.

In the Galar region, during ancient times, Golurk were often seen standing on building ledges, firing off energy beams at intruders.

Golurk is the evolved form of Golett as of level 43.

Golurk can also be found commonly in the Lake of Outrage or can evolve from Golett.

Golurk is based on a golem or automaton. Its design is based on medieval armor with some elements of giant robots common in Japanese sci-fi. Golurk may be based on the Prague golem, as both are golems and both have some sort of seal on their chests. Its aqua-grayish color and square spirals may be in reference to bismuth, a metallic element that forms iridescent crystals with a square spiral pattern.

Golurk seems to be based on the words golem and lurk.

Gorūgu is a portmanteau of golem and cyborg. 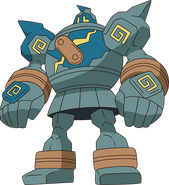 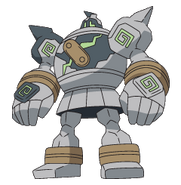 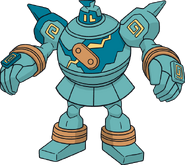 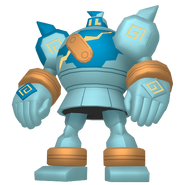 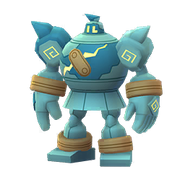