Gold & Silver Chapter is the third Chapter of Pokémon Adventures manga. It is based on the games, Gold and Silver. It consists of two volumes.

Chronologically, this Chapter takes place a year after the Yellow Chapter.

Continuing from Yellow Chapter, a boy from New Bark Town, Gold, goes to Prof. Elm for an errand. However, he encounters a trainer, Silver, who steals a Totodile from Elm. Taking a Cyndaquil, he pursues the boy, but is attacked by Team Rocket. Additionally, his Poliwag gets lost. To find them both, Gold takes Prof. Oak's Pokédex. Soon, Gold learns that Totodile grew up on Silver, so decides to defeat Silver one day. After helping a young girl catch a Teddiursa (through a bet from her grandfather), as well as receiving an egg from Elm for a project, Gold meets with a man wearing a mask.

The volume contains 13 chapters, from "Murkrow Row" to "You Ain't Nothin' but a Houndour". Gold goes from New Bark Town to Ilex Forest. 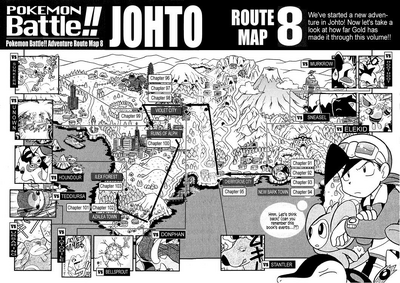 After getting defeated and injured in a battle against the Masked Man, Gold arrives to Goldenrod City, where Prof. Elm's egg hatches into a naughty Togepi. He takes it to the Day Care Center, where he receives an additional training, as well as having his Cyndaquil evolve. He soon teams up with Silver and both have a fight against Team Rocket, who crashed the entire Ecruteak City. Following Silver, Gold reaches the Lake of Rage and has the second battle with the Masked Man, as well as his and Silver's demise. In Kanto, though, by unexpected events, Blue becomes the Gym Leader of Viridian City, Red goes to Mt. Silver to heal his limbs and Yellow teams up with Pika to uncover a new threat to Johto.

The volume contains thirteen chapters, from "The Ariados up There" to "Rock, Paper... Scizor". Gold goes from Ilex Forest to Lake of Rage. This is also the final volume of Gold & Silver Chapter and the story continues in Crystal Chapter. 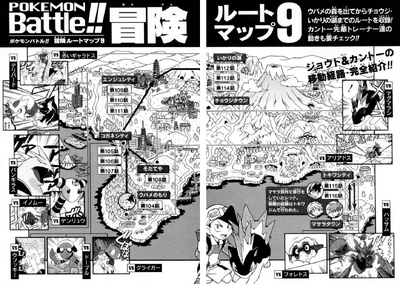