Raid Battle in the Ruins!

Name
ゴウのゴルーグ
(Gou's Goruugu)
Voice actor(s)
?
Notes
Depending on the context, "の" may be the possessive, unless it is used in the name of a character, Pokémon, or fossil.

Due to being built to be a warrior in the ancient era, Golurk was initially aggressive when it woke up and attacked everything it witnessed.

After being captured, it became calmer and served as the guardian of the Cerise Laboratory Park, and didn't mind if other Pokémon rest near it. When its seal is broken, it loses control of its internal energy(and its markings change from yellow to red), causing it to rampage, destroying almost anything and summon rain.

It tends to try being a peacemaker when other Pokémon dispute with one another.

In battle, it possesses decent power, able to take down multiple Pokémon in its debut episode, and landing hits on Ash's Dragonite and Goh's Darmanitan, and was able to withstand the attacks from a wild Aerodactyl before finishing its foe off with Hammer Arm.[1] In the same episode, Golurk appears to be well aware of its size (much like Ash's Bayleef after she got used to her becoming bigger after evolving), as it picked up a boulder but gently picked up a small boulder to examine fossils. Its battle style involves using long range attacks at sweeping arcs.

Golurk used to reside in the Colossus Ruins. It awakened when Goh and Ash Ketchum visited the site with Keira, Karabari and the group leader. During the raid, Ash and Goh struggled to battle Golurk, but with Ash's Dragonite's Hurricane and Goh's Darmanitan's Overheat, Golurk was captured by Goh and ended up being the guardian of Cerise Laboratory Park.[2]

On account of a food shortage, Golurk attempted to stop the infighting among its fellow companions after Skwovet and Cubone asked for its help. However, its seal was suddenly loosened and it went on a rampage, leading to the park being potentially flooded. After having its seal back on, it helped the boys and the other Pokémon so that the three Cascoon could evolve into Dustox. After the incident, nonetheless, its screw once again was off and it went mad again.[3]

Golurk was later seen crying with Goh's Dustox, Ash's Dragonite, and other Pokémon, giving a clue that Goh's Sobble was there.[4]

Golurk later helped Goh in searching for a fossil so he can revive it. It took a while until they managed to find the Old Amber. Soon after Team Rocket invaded the museum and used the Old Amber to revive an Aerodactyl, Golurk was sent out to battle it. After a tough battle, Golurk managed to wore out Aerodactyl and helped Goh capture it.[1] 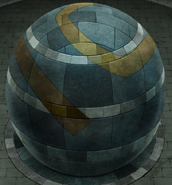 As a Raid egg

When its seal is off and it goes berserk